WFP/Abeer Etefa
A young boy sits in front of a destroyed building in Homs, Syria.

8 April 2014
Amid surging violence across Syria, United Nations Secretary-General Ban Ki-moon has condemned the killing of an elderly priest in Homs and the ongoing brutality against the civilian population, and urged all Syrians and their outside supporters to put a stop to this conflict, “now.”

“In the face of troubling new reports of atrocities in the brutal conflict driving Syria to its destruction, the Secretary-General demands that warring parties and their supporters ensure that civilians are protected, regardless of their religion, community or ethnic affiliation,” said a statement issued yesterday evening by Mr. Ban’s spokesperson in New York.

The statement said that both the Syrian Government and armed groups have the legal obligation and moral responsibility to protect civilians and “must do everything to avoid and prevent violence against civilians, including indiscriminate shelling and air attacks on civilian areas.”

Citing the killing yesterday of an elderly priest, Father Frans van der Lugt, in Homs as only the latest tragedy highlighting the urgent need to protect civilians, the UN chief condemned “this inhumane act of violence against a man who heroically stood by the people of Syria amid sieges and growing difficulties.”

The statement went on to express the Secretary-General’s horror at the gruesome images of purported executions in the Syrian town of Kassab. “While the United Nations is unable to confirm the validity of these reported atrocities, gross human rights violations undeniably continue and residents of entire villages such as Kassab have been forced to flee,” the statement said.

“Government forces continue to indiscriminately destroy whole neighbourhoods, burying entire families beneath the rubble of their homes,” it continued, adding that the Secretary-General is also extremely concerned that groups listed as terrorist organizations by the UN Security Council continue to brutalize the civilian population.

“There is a belief by too many in Syria and beyond that this conflict can be won militarily. More violence will only bring more suffering and instability to Syria and sow chaos in the region,” says the statement, urging all Syrians and their outside supporters to immediately halt the fighting.

“For the sake of families and communities across Syria, the Secretary-General appeals to all sides to permit immediately the unfettered access of humanitarian assistance and workers,” it says, adding that under Mr. Ban’s leadership, the UN is prepared to contribute to a “new day” in Syria by fostering a political settlement, providing humanitarian assistance, and supporting reconstruction. 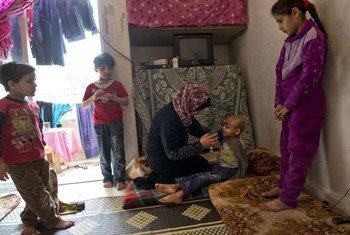 3 April 2014
Now in its fourth year, the Syrian conflict hit yet another bleak milestone today, as the United Nations refugee agency reported that the number of displaced seeking refuge in neighbouring Lebanon has passed the one million mark, putting more pressure on a host community that is already stretched to the breaking point.