It will be “lights out” for the United Nations later this evening as the Organization shuts off the lights at its iconic Headquarters complex in New York and other facilities around the world in observance of “Earth Hour,” an annual global event raising awareness about the need to take action on climate change and promoting sustainable energy consumption.

Organized by the World Wildlife Fund (WWF), Earth Hour encourages individuals, companies, organizations and Governments throughout the world to switch off their lights for one hour at 8:30 p.m., local time worldwide.

The event also recognizes that everyone's involvement is needed in order to make a collective impact and take accountability for their ecological footprint.

Coming in the lead-up to UN Secretary-General Ban Ki-moon's climate summit this September, Earth Hour aims to focus attention on the need for climate action. This is a message Mr. Ban brought back from his visit earlier this week to Greenland, where he travelled to the Ilulissat Icefjord and witnessed first-hand the alarming impacts of the climate change phenomenon.

Speaking to reporters yesterday in New York, he said the fjord's icebergs and glaciers there were melting rapidly. “The effects of global warming – melting glaciers, extreme weather patterns and rising sea levels – are starting to seriously threaten the livelihoods [of Greenland's people],” the UN chief said, calling on world leaders to come to the climate summit with “strong political will.”

For the last few years, the UN Headquarters in New York, its offices in Geneva and many other UN facilities around the world have joined other international landmarks participating in Earth Hour. This year, the UN is going the extra mile and turning off all non-essential lights at its NY campus for three hours, from 7:00 p.m. to 10:00 p.m., local time.

All UN staff members around the world have been invited to take part both in their offices and homes to demonstrate the UN's commitment to support action on climate change, one of the top priorities of the Organization.

Meanwhile, the WWF says that along with historic United Nations buildings, this year's celebration will include activities taking place from all points on the globe and beyond: from Thailand to Tahiti, from Iran to Las Vegas, Times Square to Rio de Janeiro, and from Sudan to the International Space Station.

The date traditionally coincides with the Spring and Autumn equinoxes in the northern and southern hemispheres respectively, which allows for near coincidental sunset times in both hemispheres, thereby ensuring the greatest visual impact for a global “lights out” event.

The first major city to go dark will be Auckland in New Zealand before Earth Hour moves to Australia, where the movement began seven years ago.

This year, according to WWF, a massive candle lit display on the lawn of Parliament House in Canberra will spell out, 'It's Lights Out For The Reef' as events across Australia mark the impact of climate change on the Great Barrier Reef, a threatened natural wonder which, like Greenland's Ilulissat Icefjord, has been inscribed on the UN Educational, Scientific and Cultural Organization (UNESCO) World Heritage List.

Models of climate action to be showcased daily by UN agency, ahead of Cancun parlay

2010 on track to being one of three warmest years on record, UN reports 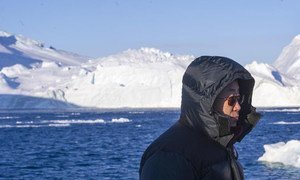 Secretary-General Ban Ki-moon travelled to the Ilulissat Icefjord today as he wrapped up his visit to Greenland, which was aimed at building momentum ahead of the summit he will convene in September on climate change.