29 March 2014
The United Nations Assistance Mission in Afghanistan (UNAMA) condemned today's attack on the Kabul headquarters of the Independent Election Commission (IEC), the second attack on an Afghan election facility in the past four days, with presidential and provincial council polls just a week away.

“The Mission denounces this latest violent attack on a civilian location. It reiterates that electoral institutions and their staff should not be the targets of deliberate attacks,” UNAMA said in a statement, which confirmed that while its own neighbouring base in Kabul was hit by small arms fire during the attack, all UN staff members are accounted for and reported safe.

According to media reports, suicide bombers were among those who attacked the IEC headquarters. Thus far, no injuries have been reported from in the initial stage of the attack.

This latest incident follows a deadly assault on another election office in Kabul this past Tuesday. Civilians were said to be among those killed in that attack, for which the Taliban reportedly claimed responsibility.

The attacks targeting the IEC are the latest in a series of recent violent incidents – including a deadly attack on a hotel in the capital and a suicide bombing of a market in Faryab – ahead of the 5 April elections, which will lead to the country's first democratic transfer of power.

“Resorting to violence to intimidate citizens from exercising their democratic rights is an admission that you have lost the ability to win over people through political persuasion,” said the Secretary-General's Deputy Special Representative for Afghanistan and acting head of UNAMA, Nicholas Haysom.

“The UN remains undeterred in carrying out its work and I am confident that the IEC is as equally determined," Mr. Haysom added. “More importantly, I am sure that ordinary Afghans remain undeterred in their desire to have their say on the future direction of their country.”

Just yesterday, Hervé Ladsous, Under-Secretary-General for UN Peacekeeping Operations visited Kabul to express solidarity with the Afghan people on the eve of next week's elections and reaffirmed the world body's support for the country through the polls and beyond.

“The upcoming elections are a crucial part of Afghanistan's political transition. I am here to underscore the UN's commitment to transparent elections and to show solidarity with all those Afghans determined to take part and make them work,” he said as he wrapped up a three-day visit.

“I want to send out a clear message of solidarity with the people of Afghanistan,” said Mr. Ladsous. “The targeting of IEC premises and its staff by enemies of democracy is repugnant” he declared, and underlined that violence will not deter the UN's resolve to support Afghanistan. 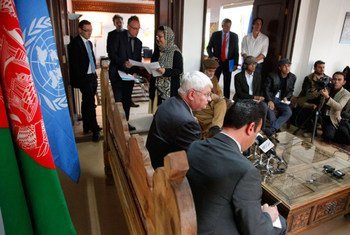 28 March 2014
The United Nations peacekeeping chief today expressed his solidarity with the Afghan people on the eve of next week’s elections and reaffirmed the world body’s support for the country through the polls and beyond.