20 March 2014
As Liberia enters its second post-conflict decade, it faces great challenges to institutionalizing critical sector reforms and building capacity for effective governance, a senior United Nations official said today, adding that seizing the present “window of opportunity” would be critical for consolidating the country’s hard-won peace and charting a future of inclusive development.

“These are complex and daunting processes, as even before the war, Liberia had few well-functioning meritocratic institutions and effective accountability mechanisms,” said Karin Landgren, head of the UN Mission in Liberia (UNMIL).

She said that despite a relatively stable political and security landscape, the country still faced daunting challenges in reforming critical sectors. “Voices across a wide spectrum continued to express dissatisfaction with national authorities and policies, she said, explaining that unions were holding demonstrations, health workers had staged two strikes since December, and protesting students shuttered the main university for three months.

“Much is at stake here and stability and confidence will need to be maintained,” she said.

As Liberia entered its second post-conflict decade since the end of a 14-year-long civil war that caused 150,000 deaths and displaced 750,000 citizens, progress in constitutional, electoral, health and education reforms were fundamentally important for Liberia’s future character, which should link to national reconciliation. The National Reconciliation Roadmap provided a path forward in that respect, yet the Government’s contribution to its implementation had been limited so far, she added.

Still, some gains could be seen across sectors, Ms. Landgren continued. Recent efforts to secure greater public accountability included an investigation into bribery allegations involving the National Oil Company, and the indictment on conspiracy charges of former senior officials in the logging sector.

A Liberian was now leading the Armed Forces for the first time since the end of the civil war in 2003, and commitments undertaken by the Minister for Finance, as well as the President, were expected to boost the security sector, she noted. In addition, a United Nations development framework was due to be signed with the Liberian National Police next week.

Yet concerns remained, she said. With elections due in October, only 60,000 out of 400,000 voters had registered, and public trust in the criminal justice system remained low. Despite a long period of calm, the situation along the eastern border with Côte d’Ivoire and Guinea remained fragile.

As UNMIL prepares to complete the second of its three-phase military drawdown in June, she said, UN troops are already withdrawing from areas around the border with Sierra Leone.

The Mission’s and the Government’s joint transition plan is an example of exceptional collaboration, but the coming phases need careful management, including dialogue with communities and making clear the goals for Liberia’s security institutions, she cautioned. “Continuing to manage an appropriate exit strategy from Liberia, in whose stability the international community has invested so much, will remain a delicate challenge for UNMIL.”

Also briefing the Council was Staffan Tillander, of Sweden, Chair of the Liberia Configuration of the Peacebuilding Commission, who called for a sustained focus on challenges in key sectors, including justice and the rule of law, where progress had been slow.

Advances were seen in managing land and natural resources, and in fighting corruption, according to Government officials, but more needed to be done, including ensuring sustainable management of the former and strengthening oversight of the latter. Police training must also improve, he emphasized.

He recalled that during his recent visit to Liberia, he had called for strengthening weak public trust by adopting a comprehensive approach to revamping political and judicial services to ensure strong oversight. Regional justice and security hubs in three counties were now delivering services and preventing conflicts from escalating, he said, warning, however, that such positive developments are not happening fast enough, especially in view of UNMIL’s drawdown later this year.

While the international community certainly could play an important supporting role, there is no substitute for Liberian ownership, political will and leadership, he stressed. 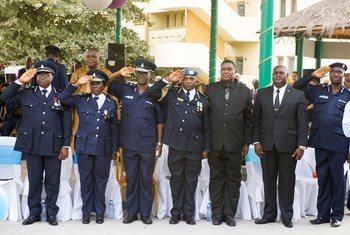