“The inter-communal hatred remains at a terrifying level, as evidenced by the extraordinarily vicious nature of the killings,” said Navi Pillay, UN High Commissioner for Human Rights, in a statement to the press during a visit in the capital, Bangui.

“This has become a country where people are not just killed, they are tortured, mutilated, burned and dismembered – sometimes by spontaneous mobs as well as by organized groups of armed fighters. Children have been decapitated, and we know of at least four cases where the killers have eaten the flesh of their victims,” she deplored.

Around 15,000 Muslims are reportedly trapped in Bangui and other areas in the North, North-West and South of the country, protected by international forces, but nevertheless in an extremely dangerous and untenable situation.

“The anti-Balaka, who originally came into existence as a reaction to the depredations of the Séléka, are now metamorphosing into criminal gangs who, in addition to continuing to hunt down Muslims, are also starting to prey on Christians and other non-Muslims,” explained Ms. Pillay.

During her two-day stay in Bangui, the UN rights chief met most notably with the Head of State of the Transition, the Prime Minister, Minister of Justice, the Head of the African Union peacekeeping mission (MISCA), as well as various civil society and humanitarian organizations.

With increasing food insecurity and malnutrition, rape and sexual violence on the rise – especially in refugee camps – and the collapse of the economy, healthcare, justice and education systems, the State is now facing a gargantuan crisis where impunity reigns.

“The State’s top leadership told me there is, in effect, no State: no coherent national army; no police, no justice system; hardly anywhere to detain criminals; and no means of charging, prosecuting or convicting them. The so-called ‘penal chain’ is not only missing links, it is not functioning at all,” explained Ms. Pillay.

“It was highly symbolic that, during my meeting with the Minister of Justice yesterday, there was no power,” she continued. “Although the lights eventually came back on, [the Minister] described how she doesn’t even have computers to record data concerning arrests, how prosecutors are threatened and at least one magistrate has been assassinated. There is, as a result, almost total impunity, no justice, no law and order apart from that provided by foreign troops.”

Though restoring law and order is a particularly urgent priority, the Government’s current inability to pay salaries makes this unlikely to happen any time soon.

“How many more children have to be decapitated, how many more women and girls will be raped, how many more acts of cannibalism must there be, before we really sit up and pay attention?” pleaded Ms. Pillay, as she called on the international community to increase funding, particularly for the establishment of a National Human Rights Commission, which the Transitional Government’s Prime Minister has committed to do.

“National Human Rights Commissions are important independent bodies with specific powers, governed by an international set of standards, known as the Paris Principles, and I offered the services of my Office to help the Government ensure it is of a high standard from the outset,” noted Ms. Pillay.

The High Commissioner warned however that “specific institutions such as these will find it very difficult to operate unless law and order and the justice system are restored, and displaced populations are able to swiftly return and rebuild their houses and their lives in full confidence that they will be properly protected by the State. There will be no political solution until these conditions are fulfilled.”

Noting that “the vital humanitarian aid effort is deplorably under-funded, with only 20 percent of requirements met so far,” Ms. Pillay urged the international community “to respond quickly to the Secretary-General’s appeal for a fully equipped force of 10,000 international peacekeepers and 2,000 police.

“I cannot help thinking that if the Central African Republic were not a poor country hidden away in the heart of Africa, the terrible events that have taken place – and continue to take place –would have stimulated a far stronger and more dynamic reaction by the outside world,” she said. 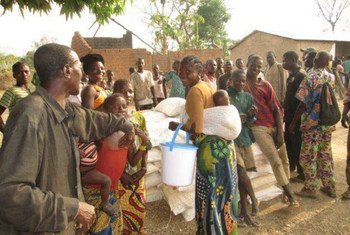 19 March 2014
A senior United Nations relief official today stressed the need to act quickly to assist people suffering from food insecurity and malnutrition in the Central African Republic (CAR), after witnessing the alarming situation first-hand during a visit to the strife-torn nation.