WFP
A mother's smile: a woman and her child pick up vital food rations from WFP in the Central African Republic (CAR).
19 March 2014

A senior United Nations relief official today stressed the need to act quickly to assist people suffering from food insecurity and malnutrition in the Central African Republic (CAR), after witnessing the alarming situation first-hand during a visit to the strife-torn nation.

A senior United Nations relief official today stressed the need to act quickly to assist people suffering from food insecurity and malnutrition in the Central African Republic (CAR), after witnessing the alarming situation first-hand during a visit to the strife-torn nation.

“Today I heard harrowing stories from ordinary women and children of losing their families in the violence and traumatic attacks that forced them to flee,” Ertharin Cousin, Executive Director of the World Food Programme (WFP), said after a visit to the north-western town of Bossangoa.

“I am humbled by their strength in these desperate times. We simply cannot deny them the assistance they need, especially after all they have endured.”

“The entire population, not only the displaced, is affected and live in a precarious food situation,” said Ms. Cousin. “The people of CAR particularly women and children need us now. We must act before the rains exacerbate the tragic situation.

“We must not wait until pictures of skeletal, severely underweight children document our failure and neglect.”

The Executive Director took part in a joint seeds and food distribution programme with the UN Food and Agriculture Organization (FAO). “If we miss the planting season, starting in April, the families will have no harvests because they have run out of food. We must provide food, so that families are not forced to eat the seeds to survive.”

So far this year, despite immense logistical and security challenges, WFP has provided food to more than 250,000 people per month in CAR, including specialized nutritious foods to help prevent malnutrition among children.

But the scale of the disaster requires deeper engagement from the international community, the agency stressed. In the coming weeks most roads will become impassable with the rainy season. The rains will also increase the risk of diarrhoea and illness for tens of thousands of displaced people in unsanitary, makeshift camps.

With only 35 per cent of funding secured for its CAR emergency operation through August, WFP has been unable to pre-position stocks required for life-saving assistance during the rains and the annual lean season when food from the last harvest runs out.

The agency noted that insecurity along the road corridor from Cameroon to Bangui, the capital of CAR, forced WFP to airlift 1,800 metric tons of rice. With the escort of the African-led peacekeeping mission, MISCA, the flow of food supplies by road has resumed but may be interrupted should security deteriorate.

“Security is the major concern. The international community must step up to help the government of CAR end violence,” said Ms. Cousin, adding that humanitarian access is a priority.

WFP also warned that it is facing, along with other humanitarian agencies, a funding shortage that may force it to disrupt food assistance to CAR refugees in Chad and the Democratic Republic of the Congo if new contributions are not received. 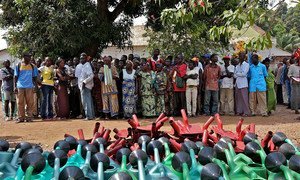