MONUSCO/Sylvain Liechti
A MONUSCO APC is greeted by FARDC soldiers on their way back from the front line in the Beni region.

14 March 2014
The head of the United Nations peacekeeping mission in the Democratic Republic of the Congo (MONUSCO) today urged the international community as well as the Congolese Government to adopt concrete measures that will build on the current stability in the country, saying “it is now up to us to win the peace...with energy, conviction and persistence.”

“There is a new momentum and we have to build on it. Our robust protection stance and the hard-won stability are the foundation to build peace,” Special Representative Martin Kobler said, in a briefing to the Security Council, in which he said that the responsibility to protect, stabilize and reform will remain the mission’s priorities.

The Democratic Republic of the Congo (DRC) has been torn apart by civil wars and factional fighting since it became independent 1960, but with the support of a series of UN missions a measure of stability has been restored to much of the vast country over the past decade.

Illustrating the progress made in the DRC in the past year, Mr. Kobler highlighted the Amani Music and Dance festival for Peace which took place in February, following an initial postponement, thanks to the return of peace in Goma.

“The Amani festival was a perfect illustration of how culture is capable of bringing people together in peace. Over 11,000 Congolese and Rwandans danced and sang together,” he insisted.

Still, “much remains to be done to bring peace and security to conflict-affected areas,” Mr. Kobler said, describing the so-called ‘triangle of death’ in Katanga, where Mayi-Mayi Bakata Katanga groups burnt some 80 villages, terrorizing the population.

“Over 400,000 people have been displaced so far. I saw children just separated from these armed groups, their eyes glazed and empty, their parents killed. They had no home to return to,” he lamented.

Ahead of the Council’s upcoming decision on renewing MONUSCO’s mandate, these contradictions “illustrate the hope and the desperation, the chances and challenges, the past and the future of the people of the Congo,” the Special Representative noted.

Mr. Kobler stressed that the mission’s priorities will remain the same: “Security and protection will be our first priority followed by the stabilization of conflict affected areas and third, supporting reform processes and the implementation of the Peace, Security and Cooperation Framework” signed by 11 nations in the Great Lakes region in February 2013.

In terms of security and protection, he told the Council that the Force Intervention Brigade, side by side with the Congolese armed forces (FARDC) has cleared many positions held by armed groups.

At the same time, the Force needs to modernize, and become more flexible and mobile and fully able to deploy across the whole of eastern DRC, holding key areas and operating deep into the most inaccessible areas. This would aid in bringing political stability, and guaranteeing the protection of vulnerable groups such as women and children.

“We need a more active presence in Ituri, South Kivu and Katanga. If we are to enhance our ability to effectively deal with armed groups, the Force as a whole has to tirelessly pursue them,” he said. To that end, the Force is reducing its use of long-term static sites and operating bases and is focusing on the use of mobile forces.

As for stabilization, he expressed the need for a restoration of State authority in conflict-affected areas, especially where armed groups were still operating in the restive eastern part of the country, in order to convert those areas into “islands of stability.” Much had been accomplished in 2013. The military defeat of the M23, the joint operations against the Democratic Forces for the Liberation of Rwanda (FDLR) and the Allied Democratic Forces (ADF).

Despite such progress, stressed Mr. Kobler, urging the Government “to be practical and focus on what can make a difference to people.”

Another crucial aspect of the stabilization process is the implementation of a national program for disarmament, demobilization, and reintegration (DDR) of former fighters. “Preparations for the elections have to start now,” he added.

“There is a new momentum and we have to build on it. Our renewed focus and your unwavering support are the foundation to build peace,” he concluded. 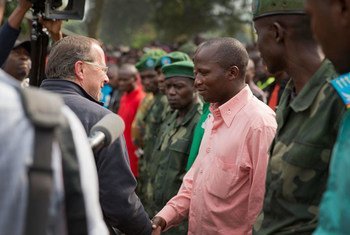 11 March 2014
The head of the United Nations peacekeeping mission in the Democratic Republic of the Congo (DRC) today warned rebel fighters in the country to ‘surrender without delay’ and join the disarmament process or face consequences.