Children and Armed Conflict
SRSG Leila Zerrougui on a field mission to Syria in December 2012.

13 March 2014
Armed conflicts have intensified recently in Syria and other countries, making such places increasingly hazardous to grow up in, a top United Nations child rights official warned the Human Rights Council today as she pledged to keep reaching out to conflict parties and mobilizing the international community to better protect children.

“In Syria, South Sudan, Central African Republic, but also in other countries, thousands of children are recruited, killed, maimed, raped and kidnapped,” Leila Zerrougui, Special Representative of the Secretary-General for Children and Armed Conflict told the Geneva-based Council.

“The survivors are often deprived of lifesaving humanitarian assistance and denied their basic human rights,” she added.

Noting that yesterday, the Syrian crisis marked the end of its third year, Ms. Zerrougui stressed that grave violations against children are being committed by Government forces and opposition groups.

“I urge all parties to respect international humanitarian law and put an end to all violations against children, including - but not limited to - the killing and maiming of children, recruitment and use of children, as well as to cease all attacks on schools and hospitals and allow unimpeded humanitarian access,” she listed in her statement.

Noting that the number of children affected by the Syrian conflict has more than doubled over the past year, she said that “Syria has become one of the most dangerous places to be a child”.

Six and a half million people in Syria are internally displaced, and half of the 2.5 million refugees are children, she noted.

Of particular concern is the use of education facilities in the country, as well as in several other places, for military purposes.

“In 2013, we have witnessed an increasing and worrying number of attacks on schools in countries such as Syria, Afghanistan and Nigeria,” said Ms. Zerrougui. “We have to join forces, we must ensure that the essential role of education in emergencies is fully recognized and that children’s right to education is protected even in times of conflict.”

Last week, the Special Representative and the UN Children’s Fund (UNICEF) launched, and the Security Council endorsed, the “Children, Not Soldiers” campaign to end the recruitment and use of children by Government armed forces in Afghanistan, Chad, Democratic Republic of the Congo (DRC), Myanmar, Somalia, South Sudan, Sudan and Yemen by 2016.

The Governments of these countries have committed to the campaign, and Ms. Zerrougui today asked Member States, UN and NGO partners in Geneva to also support the efforts. 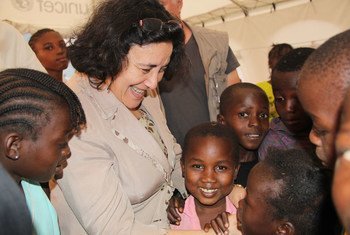 7 March 2014
The Security Council today unanimously adopted a resolution setting out practical steps to combat violations against children in armed conflict, as United Nations officials underscored the need to do more to ensure that children are protected and perpetrators are brought to justice.