7 March 2014
The Security Council today unanimously adopted a resolution setting out practical steps to combat violations against children in armed conflict, as United Nations officials underscored the need to do more to ensure that children are protected and perpetrators are brought to justice.

“All children deserve and are entitled to protection, not exploitation. They belong in school, not armies and fighting groups. Children should be armed with pens and textbooks, not guns and grenades,” Secretary-General Ban Ki-moon said in his remarks at the Council’s open debate on children and armed conflict.

Mr. Ban called on the Council to use all the tools at its disposal to protect children on the front lines of conflict and prevent a new generation from having to endure the same privations. “Let our children be children – safe and secure, living lives of dignity and opportunity.”

The 15-member body “demands that all relevant parties immediately put an end to such practices and take special measures to protect children.” It also welcomes the “Children, Not Soldiers” campaign initiated by the Secretary-General’s Special Representative for Children and Armed Conflict and the UN Children’s Fund (UNICEF), and launched yesterday, to end the recruitment and use of children by Government armed forces in conflict by 2016.

Fifteen years have passed since the Council adopted its first resolution specifically dedicated to children and armed conflict. A new element in today’s resolution is references to the use of schools by armed forces.

The Council expressed deep concern at the military use of schools in contravention of applicable international law, “recognizing that such use may render schools legitimate targets of attack, thus endangering children’s and teachers’ safety as well as children’s education. It urged all parties to armed conflict to respect the civilian character of schools, and Member States to ensure that attacks on schools are investigated and those responsible duly prosecuted.

“Military use puts schools and school children in danger. Schools become potential battle fields. Seeking ways to better prevent attacks on schools calls for efforts to incrementally prevent their military use by parties to conflict,” the Secretary-General’s Special Representative for Children and Armed Conflict, Leila Zerrougui, told the Council.

Ms. Zerrougui noted attacks on schools and hospitals, as well as the killing and maiming of children, continue unabated in Syria, one of several countries – including also South Sudan and the Central African Republic (CAR) – where conflict has taken a heavy toll on children.

In South Sudan – where more than half of the population are children – a whole generation, which should be entrusted with building a new nation, is about to deprived of a fair chance to do so, she said, while the impact on children of the ongoing violence in CAR has been “devastating.”

“We must not rely on hope when children suffering in armed conflict are calling upon us to be heard. Only action and concrete measures will ultimately make a difference,” she stated.

“Hundreds of thousands of children have their eyes upon you as you continue to lead the way in protecting children from armed conflict,” Ms. Zerrougui told the Council.

UNICEF Executive Director Anthony Lake said that while the world has made real progress in recent years, more must be done. “Just as the global community has a responsibility to end grave violations against children, each nation, too, holds a responsibility to keep children from entering the ranks of its armed forces in the first place. As does every armed group.”

Verifying the ages of soldiers is an important first step, said Mr. Lake, as is birth registration, a greater awareness at the community level of the need to end child recruitment, and addressing the specific needs of child soldiers emerging from conflict as they seek to reintegrate into society.

“With support, investment and encouragement, we can help these young men and women rebuild their lives, transform themselves and their societies, and help their countries emerge from the shadow of conflict.”

Today’s debate is being held at the ministerial level and chaired by Jean Asselborn, the Minister for Foreign and European Affairs of Luxembourg, which holds the Council’s presidency for this month and is also the current chair of the Council’s Working Group on Children and Armed Conflict.

Among those addressing the meeting was Alhaji Babah Sawaneh, who was abducted and forced to fight as a child soldier with the rebel forces in Sierra Leone, and was in 2001 the first former child soldier to address the Security Council. 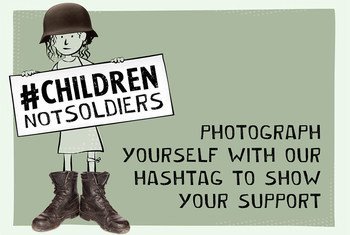 6 March 2014
The United Nations today launched a new initiative to end the recruitment and use of children in Government forces in conflict by 2016, with Secretary-General Ban Ki-moon stressing that children should be armed with pens and textbooks, not guns.