10 March 2014
Underscoring the Central African Republic’s (CAR) history of coups, violence and impunity, the head of a United Nations inquiry warned today that the spread of hate speech and the collapse of law and order in the strife-riven country are likely precursors to grave human rights violations, including genocide.

“We want to present to the [UN] Security Council a complete file so the appropriate action can be taken,” said Bernard Acho Muna, who chairs the International Commission of Inquiry tasked with probing reports of human rights violations in the CAR, compiling information, and helping identify the perpetrators of such abuses.

The three-person inquiry, established by the Security Council, is expected in the country on Tuesday and will begin gathering evidence amid what UN Emergency Coordinator Valerie Amos recently described as an “extremely grave” situation, after months of inter-religious violence has wrecked State institutions, left millions on the brink of starvation and now threatens to suck in the wider region.

Thousands of people are believed to have been killed in the CAR and 2.2 million, about half the population, are in need of humanitarian aid as a result of the conflict, which erupted when Séléka rebels launched attacks in December 2012.

The fighting has taken on increasingly sectarian overtones as mainly Christian militias known as anti-Balaka (anti-machete) have taken up arms. The UN estimates that some 650,000 have been internally displaced, while nearly 300,000 other have fled to neighbouring countries.

At a news briefing in Geneva, Mr. Muna said the spread of propaganda and the collapse of law and order in the CAR could be a precursor to serious human rights violations, including genocide.

“We would like to talk to the refugees, groups of Muslims or groups of Christians who are running away from violence. They have a story to tell [and] those stories might lead us to be able to give a better picture to the Security Council,” he said.

He said the investigators have also heard reports of genocide. “I can tell you from my Rwandan experience that there is definitely a question of hate propaganda. I think it is implied in our mandate to see that we don't wait until genocide has been committed and then we call for prosecution,” said Mr. Muna, who is a former prosecutor for the International Criminal Tribunal for Rwanda (ICTR).

“I think it is in our mandate to see how we can stop any advances towards genocide,” he said, but added: “I hope this is only noise and when you put troops on the ground then law and order, it might disappear.”

The Commission, which also includes Fatimata M’Baye of Mauritania and Jorge Castañeda of Mexico, is expected to submit its initial report to the Security Council within six months. 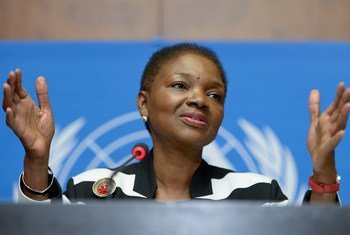