“The situation…is extremely grave and urgent action is required by everyone if we are going to prevent further bloodshed,” Valerie Amos, Under-Secretary-General for Humanitarian Affairs, said in Geneva, where she told reporters that the violence in the CAR has led to a “total breakdown of the State.”

The conflict in CAR erupted when Séléka rebels launched attacks in December 2012 and has taken on increasingly sectarian overtones as mainly Christian militias known as anti-Balaka (anti-machete) have taken up arms. Thousands of people are believed to have been killed, and 2.2 million, about half the population, need humanitarian aid.

“A State that was already very weak now does not really have any institutions. They cannot deliver basic services and they have no capacity to stop the violence,” she said, describing “palpable fear” in the eyes of the people she met on a recent visit to the capital, Bangui, and also in Bossangoa, in the north. “Lots of people [say] that they wanted to leave the country.”

Her comments echoed her briefing to the UN Security Council yesterday in New York, where she said CAR is experiencing “unacceptable sectarian brutality, persistent insecurity and fear” with tragic humanitarian consequences.

“So this is not just about Central African Republic. It is about the region as a whole and in particular the large numbers of people going to Cameroon, but also going to Chad, to DRC [Democratic Republic of the Congo] and also the Republic of Congo,” she said today.

“We, the humanitarian community, have stepped up our response. We reconfirmed our commitment to doing all we can to secure additional capacity and resources to support the people of CAR. But security is key, and the amount that we can do given the lack of institutions on the ground is constrained.”

With the Security Council weighing Secretary-General Ban Ki-moon’s proposal to establish a near 12,000-strong UN peacekeeping force in CAR to support existing African- and French-led missions, Ms. Amos underscored that more troops are needed now to restore security and stabilize the country. There is a proposal for a UN peacekeeping force but that deployment will take at least six months, she added.

She went on to express concern that, with the onset of the rainy season, a food crisis is looming and millions of people will be at risk of communicable diseases. “We are extremely worried that if we do not get the money that we need to pre-position, we will have an even further crisis,” she said.

Only 16 per cent of the $551 million requested by the UN Office for the Coordination of Humanitarian Affairs (OCHA) has been received, she said. “At the conference which was co-hosted by me and [European Union Commissioner Kristalina] Georgieva, in Brussels on 20 of January, we had a lot of pledges; we need those pledges to be turned into cash,” she said.

Meanwhile, in a separate briefing in Geneva, Rupert Colville, spokesperson for the Office of the High Commissioner for Human Rights (OHCHR), said that, although the security situation seemed to have recently improved in some parts of CAR, there is concern about the “critical situation” in Boda, a town located west of the capital.

According to a team of five human rights monitors deployed by OHCHR at the beginning of the week, large numbers of Christian and Muslim civilians in Boda and surrounding villages have suffered tremendously from the recent fighting and the deterioration of their living conditions, and tensions were running very high.

Mr. Colville explained that Boda was currently divided into a Muslim area and a non-Muslim area. Some 11,000 Muslim civilians are stranded in four neighbourhoods and at risk of further attacks by surrounding anti-Balaka elements. A buffer zone under the control of French forces, known as Sangaris, separated the two communities.

He said this situation was made even worse by the fact that the civilians cannot engage in any kind of economic activity. In addition, anti-Balaka elements are reportedly forbidding civilians from selling food to Muslims. “Even local vendors from neighbouring villages are said to have been threatened by anti-Balaka after Muslim civilians bought food from them under Sangaris’ protection,” he said, adding that Christian civilians, and in particular those displaced by the previous month’s clashes, are also living in very difficult conditions.

In Boda, unlike in other towns visited by the team, Muslim elements had reportedly been the first to attack after ex-Séléka forces had left on 29 January. “OHCHR brought concerns about the real danger of a further explosion of violence to the attention of the international forces present in the country. However, they were clearly extremely stretched,” said Mr. Colville. 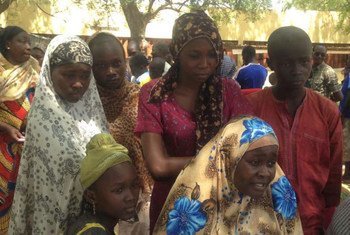 6 March 2014
Top United Nations officials today underscored the need for urgent action to confront the myriad challenges facing the Central African Republic (CAR), as the Security Council considered Secretary-General Ban Ki-moon’s proposals for deploying a peacekeeping mission that will be tasked, first and foremost, with protecting civilians in the strife-torn nation.