6 March 2014
Describing strife-torn Ukraine as “a country on edge”, Deputy Secretary-General Jan Eliasson today called for an end to the “provocative rhetoric” that was stoking tensions there, and stressed the readiness of the United Nations to facilitate meaningful dialogue among all the key parties to help ease the crisis.

“While the situation in Kiev is stable, there have been disturbing reports from some parts of the country, primarily Crimea,” Mr. Eliasson said, briefing the Security Council by video from Kiev, where he has been since Monday after having been sent by UN Secretary-General Ban Ki-moon on an urgent mission to de-escalate a dangerous situation in Ukraine and assess conditions for a peaceful settlement of the crisis.

Following months of political unrest, triggered by the Government's decision last November not to sign an agreement on broader European integration, Kiev erupted in violent demonstrations and street clashes in late January, culminating with the removal by Parliament of President Viktor Yanukovych. Tensions have been mounting in the Crimea region, where additional Russian troops and armoured vehicles have reportedly been deployed.

According to a note to correspondents issued this evening by a UN spokesperson in New York, Mr. Eliasson said Ukraine is “grappling with a series of fast-moving and serious challenges.” In Crimea, he cited examples such as blockades of Ukrainian military bases by armed elements with no insignias and attempts to intimidate international envoys, including the Secretary-General's Special Advisor, Robert Serry, who was threatened yesterday by a number of unidentified men that demanded he leave the region.

Mr. Eliasson said that in all of his meetings in Ukraine, he had underlined the urgent need for de-escalation and for a political solution to the country's current crisis. Apart from a military de-escalation, he said that there is a need to end provocative rhetoric that has only served to heighten tensions.

According to the note, he had called for meaningful dialogue among all key parties, and stressed that the UN remains ready to do its part to facilitate such dialogue. He emphasized that the Organization's efforts are rooted in the UN Charter, in particular the principles of sovereignty and territorial integrity and of the peaceful settlement of disputes. He also underlined the importance of adhering to the principles enshrined in the Universal Declaration of Human Rights.

As for his meetings, Mr. Eliasson said that he held talks with Ukrainian authorities, including the Acting President, the Prime Minister and the Acting Foreign Minister. He also met with civil society representatives, including Orthodox Church leaders, as well as members of the diplomatic community.

Mr. Eliasson emphasized the need for unity, diversity and inclusion in Ukraine, and the importance that all parts of the country and all segments of the population have a sense of participation in building their future. He also noted that the Secretary-General remains actively engaged on the situation in Ukraine, reaching out to key international actors on the urgent need to find a political solution.

The Deputy Secretary-General stated that the international community has been working on initiatives that will support the people of Ukraine and contribute to de-escalating the situation in the country. While in Ukraine, he consulted closely with the OSCE to determine how to the two organizations could best work in coordination to support human rights, monitor the security situation and address minority concerns, among other efforts.

Mr. Eliasson also informed the Council that UN Assistant Secretary-General for Human Rights, Ivan Šimonovic, had just arrived in Kiev, following a request by the Secretary-General to immediately travel to Ukraine. Mr. Šimonovic is set to visit the East, West and South of the country, including Crimea, to evaluate the current human rights situation.

Finally, the Deputy UN chief underscored the need for a solution that will benefit all of the people of Ukraine and the region and ensure the maintenance of international peace and security. 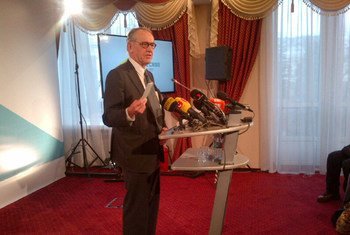 5 March 2014
The United Nations has confirmed that Senior Advisor Robert Serry is in good shape physically after being threatened today during his visit to Crimea, Ukraine, by armed men who ordered him to leave the region.