“He was met outside the main naval headquarters by a number of unidentified men who were saying that he should leave Crimea and go to the airport,” Deputy Secretary-General Jan Eliasson told reporters in New York, as he briefed via telephone from the Ukrainian capital, Kiev.

Mr. Serry apparently returned to his vehicle, and when the car could not drive away, he walked back to his hotel accompanied by a UN colleague.

“On his way to the hotel he stopped by a cafe to call me, and that’s when we talked,” said Mr. Eliasson.

Mr. Serry, who was dispatched to Crimea to take stock of the situation there, had been relying on Ukrainian authorities for security. He was threatened but not kidnapped, the deputy UN chief stressed.

“He expects that all authorities that have control of the situation will continue to guarantee his safe return to the hotel and continued work. Otherwise, he will be forced to come back to Kiev to continue his work from here.”

A UN spokesperson later confirmed that Mr. Serry is taking a flight out of Simferopol and will return to Kiev to continue his mission.

In Kiev, Mr. Eliasson has continued to meet with authorities, stressing the need for calm and international unity in the pursuit of peace amid the ongoing crisis in the country.

“I don’t think I’ve ever made so many references to the UN Charter,” he told reporters in reference to UN Charter principles of unity, sovereignty and territorial integrity. Mr. Eliasson is known to carry a copy of the Charter with him at all times, and was earlier today photographed holding up the little blue booklet while calling for a de-escalation of tensions between Kiev and Moscow.

Meanwhile, Secretary-General Ban Ki-moon, who is on an official visit to Sierra Leone, has announced that he is sending Assistant Secretary-General for Human Rights Ivan Šimonovic to Kiev and the eastern part of Ukraine, including Crimea, to monitor the human rights situation.

Mr. Šimonovic is expected to travel to Crimea over the weekend. 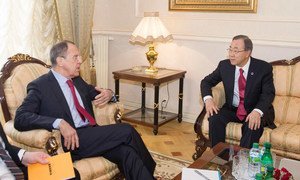 Secretary-General Ban Ki-moon and Russian Foreign Minister Sergey Lavrov discussed the ongoing crisis in Ukraine during a meeting in Geneva today, while deputy United Nations chief Jan Eliasson arrived in Kiev for consultations and the Security Council met in New York to consider the latest developments.