“I welcome the agreements reached by the Joint Committee composed of members of the Cambodian People’s Party and the Cambodian National Rescue Party to proceed, among other things, on two concrete measures for electoral reform: to review the voter registry and to elaborate a draft law on the financing of political parties,” said Surya P. Subedi, the Special Rapporteur on the situation of human rights in Cambodia.

“I hope with cautious optimism that progress toward the remaining unresolved issues would soon be made between the two parties.”

In a news release, Mr. Subedi stressed the importance of the agreement for the country, noting that the matters to be discussed by both political parties “are of concern to all Cambodians [and] are issues on which all Cambodians have the fundamental human right to express themselves, whether through demonstrations, marches or other means.”

Members of the opposition have been boycotting the Cambodian National Assembly since the middle of last year in a reported attempt to oust Prime Minister Hun Sen, whose win in July extended his 28-year rule, alleging vote-rigging and calling for a new election. The boycott escalated into demonstrations and deadly clashes with the police. A ban on demonstration was subsequently imposed in the Kingdom shortly thereafter.

Mr. Subedi welcomed the announcement made by Cambodian Prime Minister Hun Sen on 25 February to lift the ban. “Since its imposition, I have urged the Royal Government to remove the ban, which in my view was contrary to Cambodia’s obligations under the International Covenant on Civil and Political Rights, and its own constitution,” he said, though expressing concerns that some demonstrations may “continue to be blocked,” and persons are “still routinely detained for distributing leaflets encouraging workers to strike.”

Stating that the right to demonstrate and mobilize people to take part in demonstrations is “part and parcel of the right to peaceful assembly,” he emphasized that “the practice of arbitrarily detaining persons until they thumbprint a document agreeing to refrain from participating in future demonstrations is a violation of multiple human rights and must cease.”

Further stressing the State’s responsibility to ensure security during demonstrations, Mr. Subedi said he was “deeply troubled by references possibly made in jest that counter-demonstrations might be organized at the same time and place as the demonstrations by the opposition,” a practice that is forbidden by the Law on peaceful Demonstrations and that “would be amusing were it not so dangerous.” 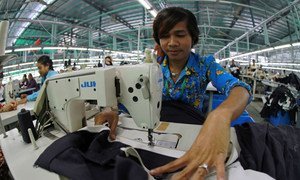 Amid reports that riot police have been deployed in the Cambodian capital Phnom Penh to break up anti-Government protests, the United Nations labour agency today urged everyone to remain calm and reiterated its calls for a probe into police action.