“From plugging into solar power in Algeria and Tunisia to investing in green funds in South Africa, diverse pathways to greener and more-inclusive economies are being pursued across the continent,” the Executive Director of the UN Environment Programme (UNEP), Achim Steiner, said in his message for Africa Environment Day. “This transition must be accelerated.”

This year’s commemoration coincides with Wangari Maathai Day, which is dedicated to the celebration of the work and vision of Africa’s first female Nobel laureate, champion of grassroots environmental activism, and fervent defender of biodiversity.

Inspired by the Ms. Maathai and her Green Belt Movement, UNEP created the Billion Tree Campaign in 2006. The campaign surpassed its initial goal of planting one billion trees in just a few months.

“Professor Maathai showed the kind of visionary leadership that will be required to win this crucial race,” Mr. Steiner said.

He added hope that “other leaders will be inspired to pick up the baton and ensure that Africa’s rich natural resources can be conserved, and thus serve as the foundation for a sustainable future and food security for all on the continent.” 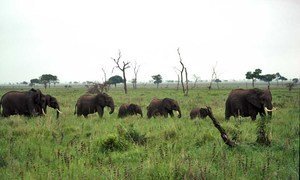 The next wave of investment and innovation in Africa will be driven by the need for new energy resources, wealth generation and job creation, the head of the United Nations environment agency told regional leaders, making a case for the need to place value on natural resources.