23 February 2014
The next wave of investment and innovation in Africa will be driven by the need for new energy resources, wealth generation and job creation, the head of the United Nations environment agency told regional leaders, making a case for the need to place value on natural resources.

“As the continent undergoes such unprecedented development, wealth accounting and the valuation of ecosystem services are critical to Africa's future growth,” Executive Director of the UN Environment Programme, Achim Steiner, told the high-level African ministerial conference on green economy in Oran, Algeria.

Natural accounting and valuation in not a fringe activity, he stressed, but a cornerstone of wealth upon which sustainable, equitable and prosperous societies will be built.

Natural capital, which encompasses resources from trees to water to fish, is a critical asset in low-income countries where it makes up around 36 per cent of wealth, according to recent World Bank estimates.

In a green economy, growth in income and employment is driven by public and private investment that reduces carbon emissions and pollution, enhances energy and resource efficiency, and prevents the loss of biodiversity and ecosystem services.

“These investments need to be catalyzed and supported by targeted public expenditure, policy reforms and regulation changes,” Mr. Steiner told an audience that included actor Arnold Schwarzenegger, the founding Chair of the non-governmental organization, R20 Initiative.

The conference is being held as the international community is crafting a new post-2015 development agenda to succeed the eight anti-poverty targets known as the Millennium Development Goals (MDGs).

The meeting also comes ahead of the first global conference on Partnerships for Action on Green Economy (PAGE) to be held in the United Arab Emirates (UAE) in early March to support and promote the adoption of the green economy at the international level.

Also Saturday, the UN-backed Green Climate Fund agreed on guidelines that will shape its work and activities. The Fund is intended to be central tool to finance climate change action, both adaptation and mitigation, in developing countries.

Among the decisions made at the meeting in Indonesia, its Board agreed that the Fund would aim for a 50-50 balance between adoption and mitigation; would aim for a floor of 50 per cent of the adaptation allocation for vulnerable countries; to maximize engagement with the private sector; and to define its gender action plan in October 2014.

The Board, comprised of 24 members from developing and developed countries, also discussed how to shape its worn on low-carbon and climate-resilient development, among other topics. 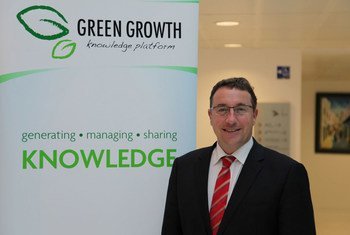 22 January 2014
As the international community lays the groundwork for sustainable development goals after 2015, the United Nations environment agency today backed a new website that compiles hundreds of technical and policy resources to help decision-makers transition to green economic growth.