UNHCR/M. Hofer
A Syrian boy photographed at a refugee transit site in Arsal, Lebanon. UNHCR is urging countries to offer increased resettlement or other forms of admission, including scholarships, to Syrian refugees.

21 February 2014
The United Nations refugee agency is urging countries to offer increased resettlement or other forms of admission, including scholarships, for an additional 100,000 Syrian refugees in 2015 and 2016.

The UN High Commissioner for Refugees (UNHCR) had earlier called on States to provide such solutions for 30,000 of the most vulnerable Syrian refugees by the end of 2014. To date, 20 countries have offered more than 18,800 places towards this goal.

The agency remains confident that the 30,000 goal will be met by the end of the year through a significant number of submissions to the United States.

“UNHCR anticipates that in the coming years, there will be increasing numbers of vulnerable Syrian refugees who will be in need of resettlement, relocation, or other forms of humanitarian admission,” spokesperson Dan McNorton told a news conference in Geneva.

He said that in light of the growing needs of the Syrian refugee population, the goal of 30,000 in 2014 represents only the first benchmark in securing solutions for this group.

As part of the emergency response, UNHCR is urging States to consider a number of solutions that can provide secure, urgent and effective protection for these people. Such solutions could include resettlement, humanitarian admission, or individual sponsorship.

States could also offer other kinds of solutions, including developing programmes that enable Syrian relatives to join family members and creating scholarships for Syrian students in order to prevent a “lost generation” of young people. They could also offer medical evacuation for refugees with serious health conditions that require life-saving treatment.

Well over 100,000 people have been killed and nearly 9 million others driven from their homes since the conflict erupted between Syrian President Bashar al-Assad and various groups seeking his ouster nearly three years ago. 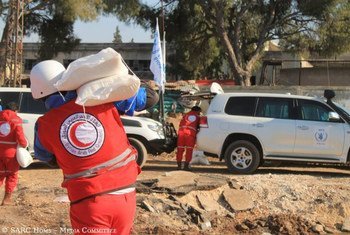 19 February 2014
An estimated 240,000 Syrian remain trapped in areas under siege resulting in severe hardship, suffering and deaths of civilians, in clear breach of the obligations under international human rights and humanitarian laws, the United Nations today reported.