20 February 2014
United Nations officials are marking the World Day of Social Justice with strong calls on the international community to take practical steps to break down the barriers of inequality by doing more to empower individuals through decent work, provide adequate social protection, and ensure the voices of the poor are heard.

“The gap between the poorest and the wealthiest around the world is wide and growing. This situation is not only between countries but within them, including many of the most prosperous,” Secretary-General Ban Ki-moon said, declaring: “The World Day of Social Justice is observed to highlight the power of global solidarity to advance opportunity for all.”

The UN General Assembly proclaimed 20 February as the World Day in 2007, inviting Member States to devote the day to promoting national activities in accordance with the objectives and goals of the 1995 World Summit for Social Development, at which leaders pledged to pledged to make poverty eradication, full employment and the fostering of social integration overriding objectives of global development.

In his message for the Day, Mr. Ban said that as inequalities widen, the social fabric of societies is both stretched and strained. This often leads to a downward spiral of economic and social uncertainty and even unrest. He said that violent conflict in many parts of the world is often rooted in deep inequality, discrimination, and widespread poverty.

“Yet there is nothing inevitable about inequality. Our shared goal should aim at taking practical steps to remove this formidable barrier to development and human dignity,” he said, underscoring that as the international community continued efforts to achieve the Millennium Development Goals (MDGs) and shape a post-2015 agenda, social justice must be central to achieving equitable and sustainable growth for all.

Echoing the UN chief’s call to action, General Assembly President John Ashe declared that the principles of equity and social justice are essential to international relations in the twenty-first century. Major strides had been made in that regard since 1995, including reducing by half the number of people living in extreme poverty and making major improvements in the areas of health and gender equality, including steady progress towards equal access of girls and boys to primary education.

Yet, while those accomplishments have been noteworthy, “we have more work to do if we want to reach the goals we set for ourselves,” he said, urging the international community to redouble collective efforts to complete the unfinished business of the MDGs.

“However, our vision cannot stop there. We must look forward to shaping a global sustainable development agenda that will take us beyond 2015,” said Mr. Ashe, stressing that the new agenda, with the eradication of extreme poverty as its centre, must be inclusive of all actors, governmental and non-governmental alike, with the contributions of stakeholders from the private sector as well as the academic and scientific communities.

“We must serve the needs and harness the capacities of all members of our global family, especially women, the young, older persons and persons with disabilities, indigenous peoples and the poor and marginalized among us,” he said, expressing confidence the world could create a new development framework that will “eliminate the disparities that thus far have prevented us from realizing our shared aspirations.” 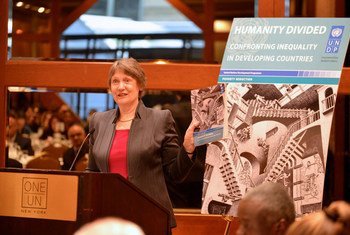 29 January 2014
Raising the alarm against deepening income disparities in countries around the world, the head of the United Nations Development Programme (UNDP) called today for a shift to more inclusive growth patterns – supported by redistributive polices and changes in social norms.