UN Photo/Jean-Marc Ferré
Michael Kirby, Chair of the of Inquiry on Human Rights in the Democratic People’s Republic of Korea, briefs the press during the launch of the report.

17 February 2014
A grim array of human rights abuses, driven by “policies established at the highest level of State,” have been and continue to be committed in the Democratic People's Republic of Korea (DPRK), according to a United Nations-mandated report released today, which also calls for urgent action to address the rights situation in the country, including referral to the International Criminal Court (ICC).

In a 400-page set of linked reports and supporting documents, culled from first-hand testimony from victims and witnesses, the United Nations Commission of Inquiry on human rights in the Democratic People's Republic of Korea has documented in great detail the “unspeakable atrocities” committed in the country, says a press release from the Geneva-based body.

“The gravity, scale and nature of these violations reveal a State that does not have any parallel in the contemporary world,” the Commission – established by the Human Rights Council in March 2013 – says the report, which is unprecedented in scope.

With a one-year mandate, the Commission was tasked with investigating several alleged violations, including those concerning the right to food and those associated with prison camps; torture and inhuman treatment; arbitrary detention; discrimination; freedom of expression, movement and religion; the right to life; and enforced disappearances, including abductions of nationals to other countries.

Along with its chairman, Michael Kirby, a retired judge from Australia, the panel comprises Sonja Biserko, founder and president of the Helsinki Committee for Human Rights in Serbia, and Marzuki Darusman, former Attorney General of Indonesia and the current UN Special Rapporteur on the situation of human rights in DPRK. The are expected to brief the press from Geneva later today.

Describing crimes such as “extermination, murder, enslavement, torture, imprisonment, rape, forced abortions and other sexual violence, persecution on political, religious, racial and gender grounds, forcible transfer of populations, enforced disappearance and the inhumane act of knowingly causing prolonged starvation,” the report adds: “Crimes against humanity are ongoing in the [DPRK] because the policies, institutions and patterns of impunity that lie at their heart remain in place.”

The Commission found that the DPRK “displays many attributes of a totalitarian State” and spotlights that there is “an almost complete denial of the right to freedom of thought, conscience and religion, as well as of the rights to freedom of opinion, expression, information and association,” and that propaganda is used by the State to manufacture absolute obedience to the Supreme Leader and to incite nationalistic hatred towards some other States and their nationals.

State surveillance permeates private lives and virtually no expression critical of the political system goes undetected – or unpunished, says the Commission, detailing that the key to the country's political system is the “vast political and security apparatus that strategically uses surveillance, coercion, fear and punishment to preclude the expression of any dissent.”

Military spending – predominantly on hardware and the development of weapons systems and the nuclear programme – has always been prioritized, even during periods of mass starvation, the report says. The State also maintains a system of inefficient economic production and discriminatory resource allocation that inevitably produces more avoidable starvation among its citizens.

Violations of the rights to food and to freedom of movement have resulted in women and girls becoming vulnerable to trafficking and forced sex work outside the DPRK. Many take the risk of fleeing, mainly to China, despite the high chance that they will be apprehended and forcibly repatriated, then subjected to persecution, torture, prolonged arbitrary detention and, in some cases sexual violence.

While the Government did not respond to requests for access to the DPRK and for information, the Commission obtained first-hand testimony through public hearings with about 80 witnesses in Seoul, Tokyo, London and Washington D.C., and more than 240 confidential interviews with victims and other witnesses, including in Bangkok. Eighty formal submissions were also received from different entities.

The report includes a letter sent by the Commissioners to the Supreme Leader, Kim Jong-un, containing a summary of the systematic, widespread and gross human rights violations that “entail crimes against humanity.”

The letter states that the three-member panel would recommend referral of the situation in the DPRK to the International Criminal Court “to render accountable all those, including possibly yourself, who may be responsible for the crimes against humanity referred to in this letter and in the Commission's report.”

Among wide-ranging recommendations to the DPRK, to China and other States, and to the international community, the Commission calls on the UN Security Council to adopt targeted sanctions against those who appear to be most responsible for crimes against humanity, stressing that sanctions should not be targeted against the population or the economy as a whole.

The Commission is scheduled to formally present its findings to the Human Rights Council in Geneva on 17 March 2014. 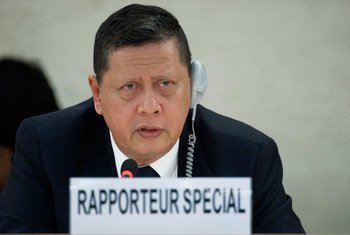 15 November 2013
Tackling human rights issues in the Democratic People’s Republic of Korea (DPRK) is crucial to pave the way for justice and reconciliation in the wider Korean Peninsula, a United Nations independent expert stressed today.