“Our attention should be given first and foremost to the issue of inequality, which in many case, is a major cause for social turbulence worldwide,” the Under-Secretary-General for Economic and Social Affairs, Wu Hongbo, said, opening the 2014 session of the Commission for Social Development, which will run at Headquarters in New York through 21 February.

Kicking off the meeting, Mr. Wu, who is also the Secretary-General for the upcoming International Conference on Small Island Developing States, noted that inequalities undermine poverty reduction, economic growth and social mobility.

Noting that too often, prosperity within countries is limited to the privileged few, he said that seven out of 10 people live in countries where income inequality has increased, citing the 2013 Report on the World Social Situation. “With high and growing inequalities, development cannot be sustained. But the right mix of social policies can curb inequality. Efforts to equalize opportunities and foster participation do make a difference.”

“Empowering people is at the core of the work of this Commission,” he continued, adding that: “Empowered individuals and social groups will achieve development that is “sustainable, inclusive and equitable.”

Speaking on behalf of the President of the Economic and Social Council (ECOSOC) Martin Sajdik, Vice-President Carlos Enrique Garcia Gonzalez highlighted some of the events on the Council’s agenda this year.

He noted that in the countdown to the 2015 deadline of the Millennium Development Goals (MDGs), the 2014 ECOSOC Annual Ministerial Review will focus on addressing on-going and emerging challenges in meeting the MDGs and in defining the sustainable development gains in the future.

Among other upcoming events, Mr. Garcia highlighted the High-Level Political Forum on sustainable development (HLPF) to be held in July. The Forum, which was created to ensure that sustainable development tops the agenda of the highest levels of government and is embraced by all actors, replaces the Commission on Sustainable Development which concluded its work on 20 September. 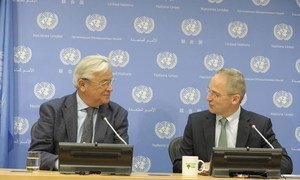 Sustainable cities are an aspiration as the number of slum dwellers continues to rise and the rate of urbanization skyrockets, a senior United Nations official today said, ahead of an upcoming UN forum that will focus on creating cities and towns more economically, socially and politically accessible.