IRIN/Nicholas Long
French troops patrol a street in Bangui, Central African Republic, as the body of a man lynched by a mob burns in the distance.

“Brazen” public admissions from anti-Balaka elements claiming responsibility for crimes and murders they have committed “are furthering the culture of impunity and encouraging more people to resort to violence,” the spokesperson for the UN High Commissioner for Human Rights (OHCHR), Rupert Colville, told journalists in Geneva.

There are also reports that the predominantly Christian anti-Balaka militants are extorting money from small businesses and individuals, according to OHCHR.

The UN Office has been working with partners to try to re-start the judicial process in Bangui towards combating the pervasive impunity in the country.

The statement comes as International Criminal Court (ICC) Prosecutor Fatou Bensouda announced that after reviewing many reports detailing acts of extreme brutality by various groups and allegations of serious crimes in recent months, her Office will open a preliminary examination into the situation in CAR.

The move, welcomed today by OHCHR, will be coordinated with efforts of the African Union and the UN in the country, to ascertain whether there is a reasonable basis to proceed with an official probe.

UN human rights staff in CAR recently conducted a mission to Boda, a town about 100 kilometres west of Bangui, where 92 people were reportedly killed between 30 January and 5 February in what are believed to be “tit-for-tat attacks on religious grounds.”

Upon the departure of ex-Séléka from the town on 29 January, anti-Balaka launched an offensive against the Muslim population of Boda. Young Muslims from the town then retaliated in a killing spree and by burning down businesses, Mr. Colville detailed.

“The team found houses scorched and the population displaced, split along religious lines,” he noted.

The UN human rights office today also expressed concern that some members of the National Transitional Council, the country’s interim advisory and law-making body, have made public statements within parliament which could instigate inter-communal fighting.

Among them, reported comments from some politicians that the 5 February lynching of a man believed to be an ex-Séléka combatant by CAR armed forces (FACA) was “justified.”

The issue was raised during a meeting between last week in the first meeting between the Secretary-General’s Special Representative in CAR, Babacar Gaye, and the new Head of State of the Transition in the country, Catherine Samba-Panza.

“We take this opportunity to recall that fundamental rights of Central African people and foreigners must be respected in all circumstances,” Mr. Colville said.

He added that the leadership of ex-Séléka, anti-Balaka and FACA have the responsibility to protect the human rights of the people in the areas under their effective control and that they will be held personally accountable for violations perpetrated by those under their control. 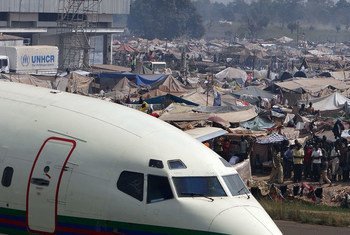 7 February 2014
The United Nations refugee agency warned today that the violence in the Central African Republic (CAR) has sent thousands of people streaming into neighbouring countries, while the International Criminal Court (ICC) announced plans to open a preliminary investigation into alleged war crimes being committed amid the ongoing sectarian bloodshed.