6 February 2014
The United Nations and the African Union (AU) affirmed their common commitment “to put an end to history’s oldest and least condemned crime” by signing landmark agreement on the prevention of and response to conflict-related sexual violence in Africa, a senior UN official today said.

“All good forces must work together to combat the horrible scourge of sexual violence in war and conflict,” said the Special Representative on Sexual Violence in Conflict, Zainab Bangura, who co-signed the document with Ambassador Smaïl Chergui, of Algeria, Commissioner for Peace and Security of the African Union.

The agreement focuses on key areas, such as combating impunity for perpetrators, capacity building and training to enhance the capacity of peacekeepers and security actors. It also strengthens national policies, legislation and institutions working on conflict-related sexual violence.

“National ownership, leadership and responsibility are absolutely essential if we are to protect women and girls, but also men and boys, from these barbaric crimes,” Ms. Bangura said. “I am confident that this framework of cooperation will help us in this fight.”

The agreement also emphasizes the importance of services for survivors, empowering women and girls, and countering the stigma of survivors.

The document was signed on 31 January, the final day of the 22nd African Union Summit in Addis Ababa, Ethiopia.

The meeting was attended by leaders from 54 African Member States and UN Deputy Secretary-General Jan Eliasson who said that “peace, development and human rights, as well as the rule of law, are inextricably linked.”

He added that the UN aims to deepen its partnership with the AU, and that Africa will always find a ready and willing partner in the Organization as it progresses on the road of economic development to provide peace, more jobs, greater equality and better living conditions.

In an interview with the UN News Centre last year, Ms. Bangura noted that “because we have more conflicts in Africa, we tend to have more of these things in Africa” but stressed that sexual violence is a global issue.

“We’re trying to make sure there is cohesion within the UN, so that we harmonize our response,” she said. “A solution cannot be imposed from above.” 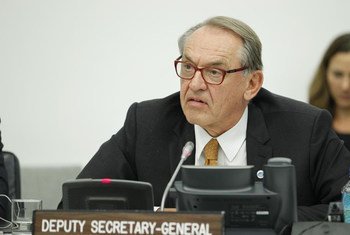 30 January 2014
Africa will always find a ready and willing partner in the United Nations as it progresses on the road of economic development to provide peace, more jobs, greater equality and better living conditions to its peoples, Deputy Secretary-General Jan Eliasson told leaders of the continent’s 54 States today.