9 April 2014
United Nations officials today called on the Government of the Democratic Republic of the Congo (DRC) to step up the fight against impunity for rape and sexual violence, which remain widespread and largely unpunished despite some progress in holding perpetrators accountable.

“I call on the Government to prioritize the fight against impunity for crimes of sexual violence, to promptly complete effective and independent investigations, and to prosecute alleged perpetrators, including those suspected of having command responsibility.”

Her call comes as the UN Joint Human Rights Office in the DRC (UNJHRO) released an in-depth report which documents serious incidents of sexual violence in the country, with over 3,600 victims registered by the office between January 2010 and December 2013.

The report also illustrates the systematic nature of some incidents of sexual violence, particularly in the volatile eastern part of the country, with a large number of cases committed in homes or when women are working fields, going to the market or fetching water.

Speaking at a news conference in New York, Ms. Pillay noted that the vast majority of the cases documented in the report were women, but there were also around 906 children and 81 male victims. Nearly half of the 3,600 victims were in the strife-torn eastern province of North Kivu. The youngest victim was only two years old and the oldest was 80 years old.

The findings of the report indicate that rape is used as a weapon of war to intimidate local communities, and to punish civilians for their real or perceived collaboration with armed groups or the national army.

The UN, the High Commissioner said, welcomed the efforts made by Congolese authorities in recent years, particularly within the military justice system, which have resulted in an increased number of arrests and prosecutions for crimes of sexual violence.

Commitments by DRC authorities to engage on issues related to sexual violence at the highest level have also been welcome, including the Joint Communiqué that the authorities signed with the UN in March 2013.

“Unfortunately, the political will at the highest level is not sufficiently translated on the ground,” said Ms. Pillay. “Not all Congolese authorities are prepared or equipped to conduct thorough investigations into all cases of sexual violence and to prosecute the most senior officers of the FARDC. The severe lack of resources and human capacity also remains a major obstacle to the proper functioning of the judicial system in the DRC.

“Also, many victims do not report incidents for fear of retaliation, stigmatization or rejection by their families and communities,” she noted, adding that in cases where victims obtain legal victories, they do not receive the reparations to which they are entitled from perpetrators and the State.

Under-Secretary-General for Peacekeeping Operations Hervé Ladsous told reporters that the Congolese Government has taken many positive steps in the past year towards holding perpetrators of sexual violence responsible, particularly within the FARDC.

However, the Government needs to address the root causes of impunity and systemic issues, including strengthening and reforming the judicial and prison systems, efforts with which the UN peacekeeping mission in the DRC (MONUSCO) has been assisting in line with its mandate.

Zainab Hawa Bangura, the Secretary-General’s Special Representative on Sexual Violence in Conflict, said her engagement with the Congolese Government has shown that the country’s leaders have strengthened their political will to address these crimes.

“What is required now is for this political will to be sustained and translated into change on the ground to protect civilians from this human rights abuse,” she stated, adding that the international community must also continue its efforts to build the Government’s capacity to prevent sexual violence in conflict from occurring, end impunity and deliver reparations, justice and service and support for victims.

In a related development, the Secretary-General’s Special Envoy for the Great Lakes Region, Mary Robinson, was in Bukavu in DRC’s South Kivu province yesterday, where she met with local authorities and women’s organizations.

Ms. Robinson said that she was shocked by the number of women and young girls who continue to be victims of sexual violence in the DRC, and she reiterated the need to end impunity and seek transitional justice. 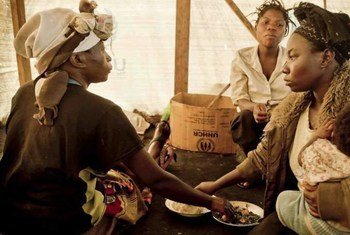 30 July 2013
The recurrent conflict in the Democratic Republic of the Congo’s (DRC) North Kivu province has led to an alarming rise in rapes and violence against women and girls, the United Nations refugee agency said today.