The Rome-based agency said its Food Price Index averaged 203.4 points in January, which is 1.3 per cent below December and 4.4 per cent below January 2013.

The Index measures monthly changes in international prices of a basket of meat, dairy, cereals, oils and fats, and sugar.

“We're seeing lower prices due to abundant supplies, but stronger upturn in demand, such as an increase in the pace of imports from Asia, could limit the decline,” said FAO economist Abdolreza Abbassian.

Even meat prices, which had strengthened over the past few months, fell slightly in January.

“The only notable exception was a rise in dairy prices,” said Michael Griffin, FAO's dairy and livestock market expert.

“The bumper cereal crop in 2013 would help in replenishing world reserves,” FAO said in its news release.

Based on the latest information, early prospects for the 2014 harvest looks good, FAO predicted. This view is shared by a separate report published today by the Agricultural Market Information System (AMIS) a G20 initiative which is housed at FAO and managed by ten international organizations. 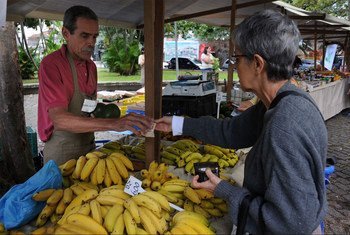 9 January 2014
For the second consecutive month, the cost of food worldwide remained nearly unchanged in December, with overall global food prices for 2013 among the highest on record, the United Nations food agency today reported.