27 January 2014
Warning that the Central African Republic (CAR) is now at a critical juncture, the United Nations human rights chief today called on the international community to help restore security in the country, including by boosting the peacekeeping effort there.

Warning that the Central African Republic (CAR) is now at a critical juncture, the United Nations human rights chief today called on the international community to help restore security in the country, including by boosting the peacekeeping effort there.

“We simply cannot let the social fabric of this country be torn apart. I call as a matter of utmost urgency upon the international community to strengthen peacekeeping efforts,” said High Commissioner for Human Rights Navi Pillay.

“There is a need to urgently restore security not only in Bangui but also in other parts of the country. Many lives are at stake,” she warned in a news release.

Thousands of people are estimated to have been killed, and 2.2 million, about half the population, need humanitarian aid in a conflict which erupted when mainly Muslim Séléka rebels launched attacks in December 2012 and has taken on increasingly sectarian overtones as mainly Christian militias known as anti-Balaka (anti-machete) have taken up arms.

The High Commissioner’s call comes amid renewed fighting and the flight of ex-Séléka and Muslim civilians towards the north of the country, her office (OHCHR) said in a news release.

Since last week, clashes between anti-Balaka and ex-Séléka supported by armed Muslim civilians in several neighbourhoods in the capital, Bangui, have resulted in several casualties. Mobs went on a rampage, looting shops, homes and mosques in Muslim areas of these neighbourhoods. The fighting has also forced ex-Séléka and Muslim civilians to flee towards the town of Damara, some 65 kilometres north of Bangui.

Ms. Pillay welcomed the recent appointment of Catherine Samba-Panza as the Head of State of the Transition and her repeated calls for an end to violence.

“However, the security and human rights situation has further deteriorated over the past few days. Muslim civilians are now extremely vulnerable. Many are being pushed out of the country, alongside ex-Séléka, and are now fleeing, mostly towards the Chadian border,” she said.

Serious incidents of violence have also been reported beyond Bangui as ex-Séléka and Muslim civilians flee the country.

Despite the presence of African peacekeeping troops in Bouar, clashes were reported between remaining ex-Séléka and anti-Balaka, supported by former national army (ex-FACA) soldiers, on 20 and 21 January. Several civilians and ex-Séléka fighters were reportedly killed. The town is deserted and anti-Balaka elements have allegedly threatened international organizations that are sheltering the Muslim relatives of their staff.

Ms. Pillay also voiced concern about the proliferation of armed groups and the “explosion of common criminality” which are making the situation even more chaotic and dangerous. 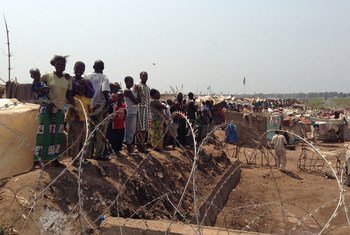