IAEA/Dean Calma
IAEA holds its Board of Governors meeting at its Headquarters in Vienna, Austria, 24 January 2014.

24 January 2014
The recently concluded action plan aimed at allaying international concerns about Iran’s nuclear programme is an important development, the head of the United Nations atomic watchdog said today, while adding that there is still a long way to go in this effort.

Last November, China, France, Germany, Russia, the United Kingdom and the United States agreed on a Joint Plan of Action with Iran aimed at achieving “a mutually-agreed, long-term comprehensive solution that would ensure Iran’s nuclear programme will be exclusively peaceful.”

The plan envisages the Agency undertaking monitoring and verification of a series of “voluntary measures” to be taken by Iran over a period of six months.

“This is an important and encouraging development after several years of little or no progress,” Yukiya Amano, Director General of the International Atomic Energy Agency (IAEA), told a news conference in Vienna, following his meeting with the Agency’s Board of Governors.

Mr. Amano said the implications of the action plan for the IAEA are “quite far-reaching,” with much more work and more travel for safeguards staff dealing with Iran.

In his briefing to the Board, which endorsed the plan, Mr. Amano said the Agency will need to nearly double the staff resources devoted to verification in Iran, and significantly increase the frequency of the verification activities which it is currently conducting.

“Our inspectors will need access to additional locations. We will have to acquire and install more safeguards equipment and analyze more samples. And the volume of analytical work and reporting will increase,” he told a special meeting of the 35-nation Board, which is one of the Agency’s main policy-making bodies.

This additional effort will result in increased costs to the Agency, estimated at around 6 million euros over the next six months.

“I believe this new phase of work in Iran will be a further important step towards achieving a comprehensive solution to the Iran nuclear issue. But there is still a long way to go,” he stated.

The Director General also informed the Board that the IAEA is implementing the Framework for Cooperation agreed with Iran last November. Under the agreement, Iran’s cooperation will include providing the IAEA with timely information about its nuclear facilities and in regard to the implementation of transparency measures.

For its part, the IAEA agreed to continue to take into account Iran’s security concerns, including through the use of managed access and the protection of confidential information.

Another meeting with Iran is expected to take place next month, and Mr. Amano will then report on developments to the Board at its March meeting, he said.

“I hope that all of the work undertaken by the Agency will provide an important contribution to resolving this important issue and will lead to further positive developments.” 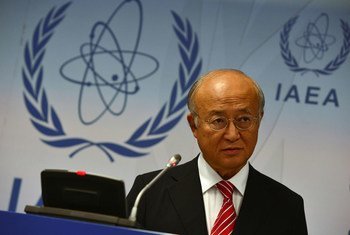 11 November 2013
The United Nations atomic watchdog and Iran today signed a joint statement in Tehran in which they agree to strengthen their cooperation and dialogue to ensure the peaceful nature of the country’s nuclear programme.