In a whirlwind of events at the World Economic Forum in Davos today Secretary-General Ban Ki-moon highlighted the vital need for Governments, business and civil society to cooperate whether in erasing gender inequality and harnessing “girl power” to reach development goals, combatting climate change, or eliminating hunger.

He appealed to the investment instincts of his listeners at the annual Forum in the Swiss Alps and their desire for good returns to get behind efforts to release the potential of over half a billion adolescent girls in developing countries currently held back by poverty, discrimination and violence, calling them key to achieving a crucial raft of development goals.

“Investors tend to rate opportunities based on their potential for returns,” he told a group of eminent persons from the private sector, academia, Governments and civil society dedicated to achieving the eight United Nations anti-poverty Millennium Development Goals (MDGs).

“The United Nations gives girls a ‘gold rating.’ When you invest in their future, you are guaranteed results that multiply across society – on health, education, peace and the welfare of future generations,” he said, highlighting the returns on “girl power.”

Addressing a lunch of his MDG Advocacy Group on the sidelines of the Forum, he stressed that investing in girls was vital in the “final push for success.”

The MDGs, adopted by the UN Millennium Summit of 2000 aim to slash extreme hunger and poverty, boost access to health care and education, achieve gender equality and environmental stability, reduce maternal and child mortality and the incidence of HIV/AIDS, all by the end of 2015.

“We are in a race against time. The MDG deadline is just over 700 days away,” Mr. Ban warned. “You understand that when we give a girl better health, education and well-being, we see results far beyond that individual. A girl is as valuable to our world as a tree is to a forest. When a tree grows up straight and strong, the whole environment benefits. When a girl grows up straight and strong, her family, her community and even her country can feel the positive effects.” 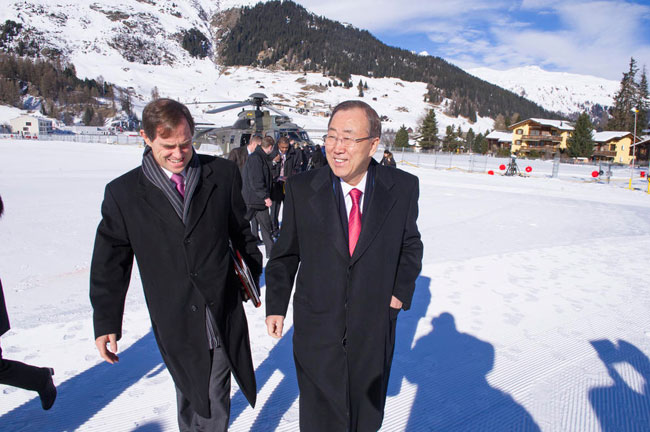 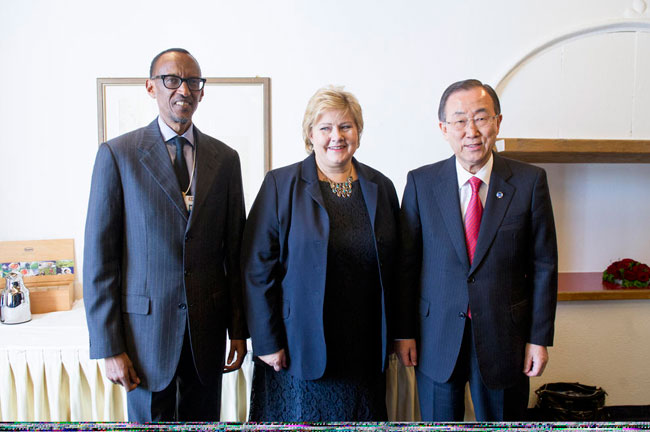 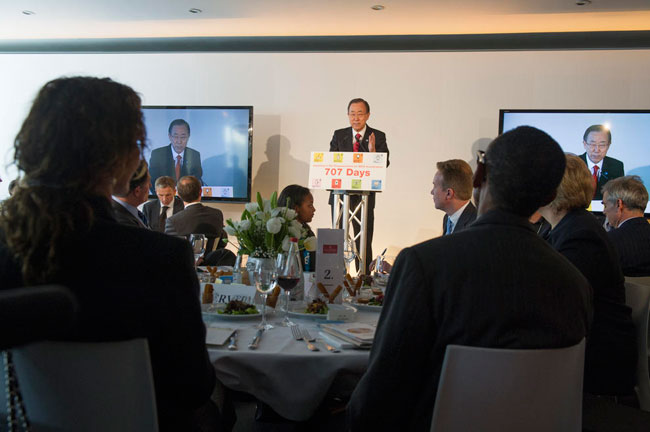 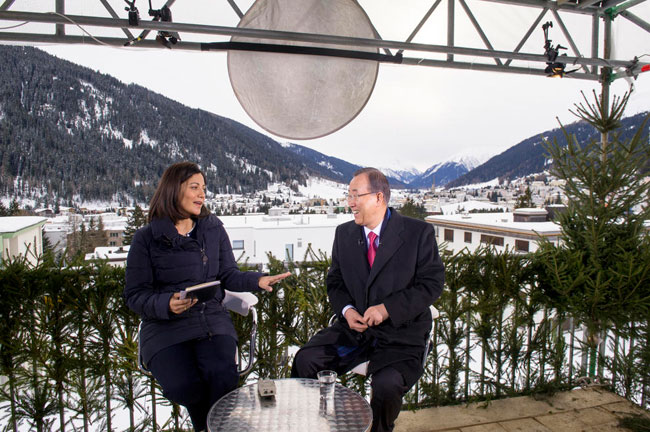 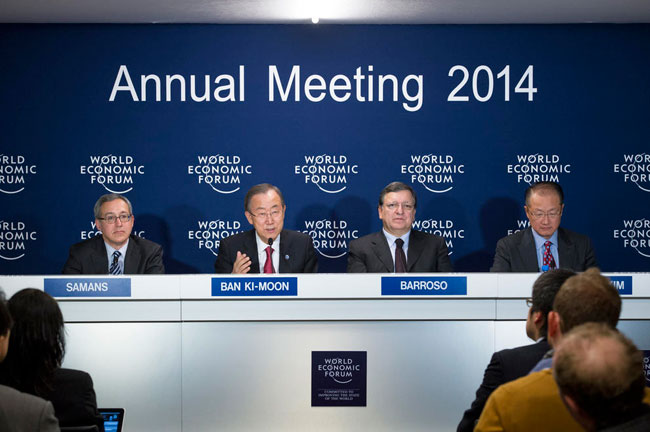 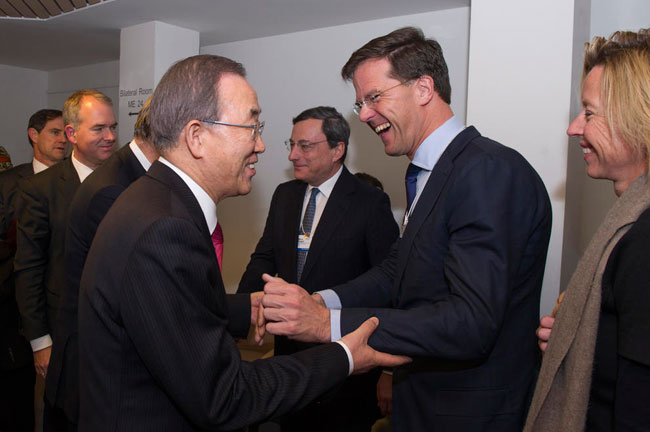 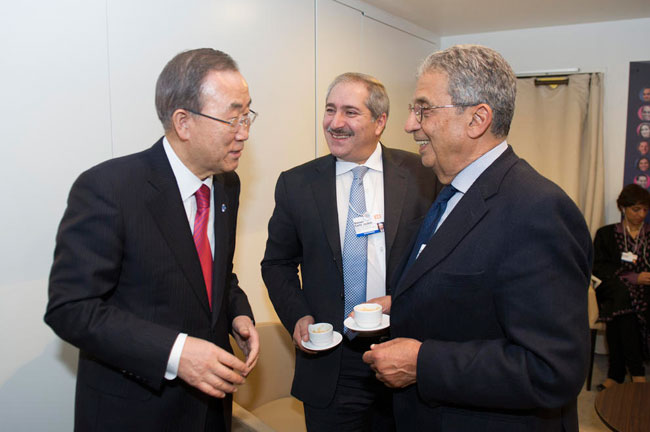 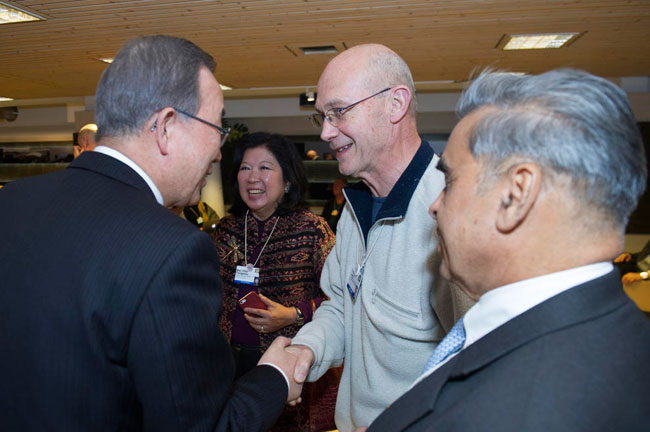 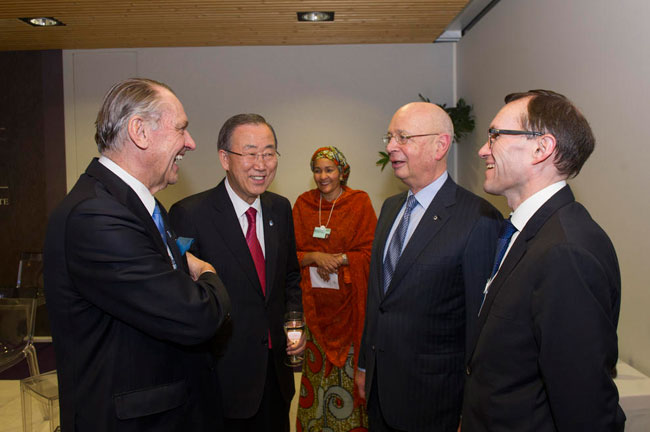 He noted that every year a girl stays in primary school boosts her eventual wages by up to 20 per cent, and women and girls reinvest the vast majority of their income – 90 per cent – back into their families. When female education goes up, so does economic growth.

“Today I urge you to keep girls at the centre of all of your strategies,” he declared, stressing that this is more than a philanthropic issue. “This is a challenge to do business better. It is a chance to change your institutions so they reflect more enlightened attitudes about girls and include strategies to improve their lives…

“When we support girls, they reward society with enormous contributions in creativity, compassion and – yes – girl power.”

Mr. Ban set up the Group in 2010 to help him build political will and mobilize global action to achieve the MDGs. It is currently co-chaired by Rwandan President Paul Kagame and Norwegian Prime Minister Erna Solberg.

At a later news conference, he singled out climate change as another issue where Governments, business and civil society must cooperate closely to ensure that a 2015 summit in Paris reaches a global legal agreement on a new accord to limit greenhouse gasses and other factors behind the warming, floods, droughts and violent storms that are now occurring more frequently. The goal is to limit the global temperature rise below 2 degrees centigrade.

“I am asking Government, business, finance, and civil society leaders to come with bold announcements and actions, because achieving an ambitious and legal climate agreement will require political leadership and clear signals,” he said, referring to a preparatory summit he is convening at UN Headquarters in New York in September.

“Many people may have jokingly said this is going to be another talk shop. This is going to be [an] action summit, not [a] talk summit, which will generate much spur in the area of sustainable energy and mobilizing climate financing, and also promoting resilient urban development, cities and transport,” he said following talks with European Commission President José Manuel Barroso and World Bank President Kim Yong Kim.

He commended Mr. Barroso for the 28-member European Union’s (EU) recently announced goal of cutting carbon emissions by 40 per cent and producing at least 27 per cent of energy from renewable sources, both by 2030.

“The European Union has set a standard that all need to follow,” he said. “We are now at a critical stage in the global conversation on climate change.”

“You might wonder if that is too ambitious, but I have seen such progress with my own eyes, in my own country, in my own lifetime,” he said, noting also that the number of hungry people in China has dropped by 114 million since 1990, 10 million Brazilians are no longer hungry, and over 30 other countries have already met or exceeded the MDG to halve the proportion of their populations who are hungry.

“This success has been achieved through political will, concerted action and private sector engagement. Each country has chosen their own path, but they all made ending hunger a political priority. It has been a joint effort – involving governments, farmers, civil society, academia and the private sector. From small-scale farmers who trade their surplus at the village market to billion-dollar multinational corporations, business has played a vital role. This is needed now more than ever.”

Mr. Ban wrapped up the themes at a dinner of the UN Global Compact, the world’s largest corporate sustainability initiative, with the participation of 8,000 companies and 4,000 civil society organizations from 145 countries, which seeks to link business engagement with global priorities, including poverty and disease eradication, climate change mitigation, women’s empowerment, children’s and labour rights, and fighting corruption.

He again stressed the imperative of business participating in the efforts to combat climate change, achieve the MDGs and define a post-2015 development agenda for eradicating extreme poverty and protecting the planet’s resources.

“Lives are at risk; businesses, small and large; economies; the security of nations,” he said of climate change. “The evidence is all around us. We need to act. Now. Together.”

“If you have not yet joined the Global Compact, I encourage you to do so,” he added. “Today, I appeal to each of you to become advocates for climate action and the post-2015 agenda and sustainable development.”

United Nations Secretary-General Ban Ki-moon and the General Assembly President John Ashe, today urged the bloc of developing countries known as the “Group of 77 and China” to work collectively towards reaching the anti-poverty targets known as the Millennium Development Goals (MDGs) by the 2015 deadline.