8 January 2014
United Nations Secretary-General Ban Ki-moon and the General Assembly President John Ashe, today urged the bloc of developing countries known as the “Group of 77 and China” to work collectively towards reaching the anti-poverty targets known as the Millennium Development Goals (MDGs) by the 2015 deadline.

“Less than two years remain to the end of 2015,” Mr. Ban said at a ceremony at UN Headquarters where Fiji handed over the chairmanship of the Group to Bolivia. “In that time, we must do much more to achieve the MDGs, define a unified and universal post-2015 development agenda and agree on a global climate agreement.”

He noted the importance of the forum’s members working together with the available tools to eradicate poverty, improve social and economic well-being and lay the foundations for a sustainable future.

“We live in a time of almost limitless possibility,” Mr. Ban said, but also noting that this is a time when the stakes have never been higher.

Assembly President Ashe also stressed the importance of working collectively, particularly to lay the groundwork for a post-2015 development agenda,

“The next 12 months will determine whether or not we are able to deliver on the promises of 2015,” Mr. Ashe told participants at the event, which was held in the Economic and Social Council (ECOSOC) Chamber.

There, Fiji’s Foreign Minister RatuInoke Kubuabola ceremonially handed over the chairmanship to Bolivian President Evo Morales, who will speak to journalists later today.

“Under Bolivia’s watch, the G77 [the Groups’ more informal moniker] will have an important role to play in the activities and processes that will – as the saying goes – make or break our collective success,” said Mr. Ashe.

The Group, established in 1964 by 77 States, now includes more than 130 countries, some two-thirds of the UN membership, and over 60 per cent of the world’s population.

Marking the G77’s fiftieth anniversary, Mr. Ashe praised the Group for its strong commitment to working together over the years, even as goals and national circumstances have changed.

“You are an example of the might of South-South cooperation, and a harbinger of greater collaboration that is yet to come,” he said.

Speaking to journalists in New York later in the day, Mr. Morales said that Bolivia had decided to mark the Group’s official anniversary with a special event to be hosted on 15 June, with the participation of Mr. Ban, who he called “the elder brother of the United Nations”.

Past year a challenging one for 'Group of 77' developing countries, Annan says

Fréchette to address Summit on developing countries in Qatar 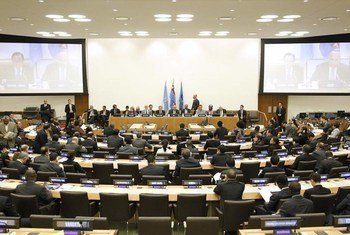 26 September 2013
Top United Nations officials today stressed the importance of the participation of the bloc of developing countries known as the Group of 77 (G-77) and China in shaping the global development agenda beyond 2015.