20 January 2014
Employment is not expanding sufficiently fast to keep up with the growing labour force, the United Nations labour agency today reported, calling for job-friendly macroeconomic policies and a greater attention to labour market and social policies.

Employment is not expanding sufficiently fast to keep up with the growing labour force, the United Nations labour agency today reported, calling for job-friendly macroeconomic policies and a greater attention to labour market and social policies.

Global unemployment rose by 5 million people in 2013, and if the trend continues, will rise by a further 13 million people by 2018, the International Labour Organization (ILO) said in its annual outlook, ‘Global Employment Trends 2014.’

“The report finds that those economic improvements will not be sufficient to absorb the major labour market imbalances that built up in recent years,” Director of ILO’s Research Department, Raymond Torres, said in the foreword to the report. “The root causes of the global crisis have not been properly tackled.”

“Over the foreseeable future, the world economy will probably grow less than was the case before the global crisis,” he added. “This complicates the task of generating the over 42 million jobs that are needed every year in order to meet the growing number of new entrants in the labour market.”

The financial system remains “the Achilles heel of the world economy.” Mr. Torres wrote, with little progress made in reducing vulnerable forms of employment such as informal jobs and undeclared work.

The global unemployment rate remained at 6.0 per cent of the global labour force, unchanged from 2012, according to the UN.

The bulk of the employment gap is in the East Asia and South Asia regions, which represent nearly half of the additional jobseekers, followed by Sub-Saharan Africa and Europe. The drop in participation rates is particularly pronounced among East Asian women, who occupy less than two in five newly created jobs.

By contrast, Latin America added fewer than 50,000 additional unemployed people to the global number, or around a per cent of the total increase last year.

“On the basis of current macroeconomic projections, the ILO expects little improvement in the global labour market in 2014, with the global unemployment rate ticking up to 6.1 per cent,” the UN agency reported.

Young people are particularly affected by the “weak and uneven recovery,” with some 74.5 million people between the ages of 15 and 24 unemployed last year. That figure is one million higher than in 2012.

The global youth unemployment figure is now three times as high as the unemployment rate of adults, 13.1 per cent versus 4.6 per cent.

In addition, the number of young people who are not employed, training or in schools is also up, with one-quarter of all 12-29 year olds in some countries in this category.

In addition to the increase in the number of people unemployed, more people are now unemployed longer. Among the concerns is that jobseekers out of work for long periods lose their skills at an accelerated pace, making it that much harder for them to find alternative employment at a similar occupation or skill level.

Among its recommendations, the report’s authors wrote that to ensure a lasting job recovery, strategies needed to combined short-term measures with further action to tackle long-standing imbalances.

The UN agency’s report comes ahead of the annual World Economic Forum to be held in Davos later this week, in which Secretary-General Ban Ki-moon is due to participate. Davos, as the Forum is commonly called, brings leaders from business, politics, academia and society to shape global, regional and industry agendas. 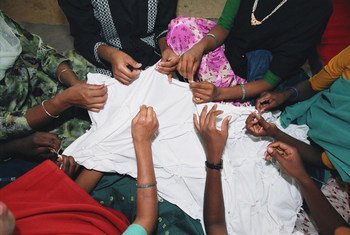 31 December 2013
Concerned about ongoing protests in Cambodia which have virtually shut down the garment industry, the United Nations labour agency today called for an end to violence and destruction of property, and encouraged the factories to be reopened.