OCHA/Gemma Cortes
As heavy rains and floods hamper activities to help victims of typhoon Haiyan in Tacloban, the Philippines, the need for food aid might extend until the next rice planting season in May.
16 January 2014

The recovery process in the Philippines has been steady but uneven, the United Nations top relief official said today, urging donors to increase support for the $788 million response plan for Filipinos, who continue to depend on humanitarian support, particularly to rebuild their homes.

“I am particularly concerned that just 20 per cent of funding has been secured to provide tools and materials so that people can rebuild their home,” she said.

The rainy season is approaching fast with flooding and landslides reported in the South-East Asia region. In Philippines, the early rains have already led to further displacement, according to OCHA.

Urgent funding is also needed for tools and seeds so that farmers are ready for the next planting season.

Typhoon Haiyan swept ashore on 8 November killing nearly 6,000 people, displacing 4.1 million at the height of the emergency, and destroying homes and livelihoods.

The UN launched a one-year Strategic Response Plan for nearly $800 million dollars in mid-December, in support of the Government’s strategic plan, amounting to some $8.17 billion over four years to guide the recovery and reconstruction in the affected areas.

The plan aims to restore the economic and social conditions of the affected areas at the very least to pre-typhoon levels and to create a higher level of disaster resilience.

Secretary-General Ban Ki-moon saw the devastation and recovery efforts first-hand in December. Visiting Tacloban, which bore the brunt of the typhoon’s fury, he told reporters that he was “deeply moved and inspired.”

At the time, the overall UN appeal was only 30 per cent funded. Pledges now total $331 million or around 42 per cent.

“Donors, humanitarian agencies, and most of all, the people of the Philippines, have achieved a huge amount in the past two months, but the delivery and reach of aid remains uneven,” Ms. Amos said in today’s statement.

She noted that electricity supplies are unreliable in vast parts of the affected areas, hampering recovery efforts and business activities in urban areas, including Tacloban.

Many schools reopened on 6 January but there are shortages of learning spaces and school materials.

“During the next few months, the humanitarian community will focus on ensuring a smooth transition from urgent assistance to long term recovery and rehabilitation efforts,” she said. “We count on the continued support of donors for this work.” 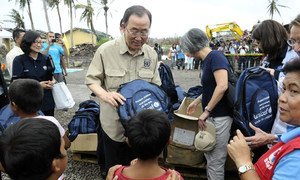 United Nations Secretary-General Ban Ki-moon has urged the international community to scale up support for the massive typhoon recovery plan under way in the Philippines, where the Government-led effort that is helping millions of people rebuild their lives must be underpinned by measures to improve the country's preparedness and resilience to natural disasters.