UNHCR/M. Hofer
Syrian refugees queue to be registered on the outskirts of the Lebanese town of Arsal.

16 January 2014
The United Nations human rights chief today warned armed opposition groups in Syria that executions and unlawful killings violate international law and may amount to war crimes, as reports continue to emerge of mass executions in the northern part of the strife-torn nation.

The Office of the High Commissioner for Human Rights (OHCHR) said in a news release that it has received reports in the past two weeks of a succession of mass executions of civilians and fighters who were no longer participating in hostilities in Aleppo, Idlib and Raqqa by hardline armed opposition groups in Syria, in particular by the Islamic State of Iraq and Syria (ISIS).

“While exact numbers are difficult to verify, reliable eyewitness testimony that we have gathered suggests that many civilians and fighters in the custody of extremist armed opposition groups have been executed since the beginning of this year,” said High Commissioner Navi Pillay.

Reports suggest that in the first week of January, numerous individuals were executed in Idlib by armed opposition groups. On 6 January, in Aleppo, three individuals who had reportedly been held by ISIS at its base in Makhfar al-Saleheen were found dead, handcuffed, with bullet wounds in their heads.

On 8 January, in Aleppo, numerous bodies, again mostly handcuffed and blindfolded, were found in a Children’s Hospital which had been used as a base by ISIS until it was forced to withdraw after a raid by other armed opposition groups. An eyewitness interviewed by OHCHR identified at least four local media activists among the dead, as well as captured fighters affiliated with various armed opposition groups.

“Information from Raqqa has been more difficult to verify, but there are deeply disturbing reports emerging of mass executions by ISIS when the group withdrew from Raqqa at the beginning of this month, and when it regained control earlier this week,” Ms. Pillay said.

The High Commissioner reminded all parties to the conflict that international law prohibits violence to life and person, in particular murder of all kinds, mutilation, cruel treatment, and torture at any time and under all circumstances.

“These reports are particularly alarming, given the large numbers of people, including civilians, that armed opposition groups in Syria are believed to be holding in custody. The taking of hostages is prohibited under international humanitarian law and may also constitute a war crime.”

The High Commissioner reiterated her call on all parties to the conflict to treat individuals held in their custody with humanity and to immediately release all those who are deprived of their liberty in violation of international law.

“I further urge all parties to the conflict to strictly respect their obligations under international law and remind them that everyone involved in serious crimes must be held accountable.”

The conflict in Syria, which will soon enter its fourth year, has led to more than 100,000 deaths and left over 9 million people in need of humanitarian assistance. It has also been marked by grave human rights violations committed by both pro- and anti-Government forces, including enforced disappearances, torture and arbitrary detentions. 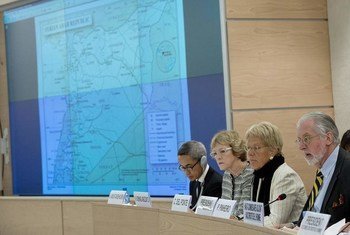