The top United Nations climate change official today urged investors to accelerate the greening of their portfolios as a crucial step towards a low-carbon economy that can better cope with the threats, and seize the opportunities from, climate change.

Specifically, Christiana Figueres called on investors to move out of high-carbon assets and into assets built on renewable energy, energy efficiency and more sustainable ways of business that green global supply chains.

“The pensions, life insurances and nest eggs of billions of ordinary people depend on the long-term security and stability of institutional investment funds. Climate change increasingly poses one of the biggest long-term threats to those investments and the wealth of the global economy,” said Ms. Figueres, the Executive Secretary of the UN Framework Convention on Climate Change (UNFCCC).

“Institutional investors who ignore the risk face being increasingly seen as blatantly in breach of their fiduciary duty to their beneficial owners – men and women who have worked hard all their lives to put away something for their retirement and for their children,” she said.

The call comes as hundreds of financial, corporate and investment leaders with more than $20 trillion in combined assets gathered at UN Headquarters for a day-long summit to discuss the implications of climate change for capital markets and their portfolios.

The biennial Investor Summit on Climate Risk aims to catalyze and scale-up investor action, while underlining the risks to investments, including pensions and nest-eggs worldwide from business as usual.

Ms. Figueres told a news conference on the margins of the summit that policy on climate change at the international level, and at the national level, is by now inevitable, owing to the “pounding and compounding” impacts of climate change. Governments are moving forward with efforts to reach a global climate agreement by 2015.

She stated that there is an “inverse relationship” between the pace of policy and the scale of risk. “The longer we take on achieving final clarity on policy, the more the risk goes up for investors and it is in the investor community interest to have policy sooner rather than later.”

Ms. Figueres also called on investors to ask the companies they are invested in to not use shareholder funds to influence policy against climate change.

Ignorance of climate change impact on any investment portfolio is no longer an excuse, she added. “Those days are over and we need to stand up now and make the necessary shifts in capital to come on board with the new opportunities that we heard this morning that are actually opening up for those capital shifts.”

According to the International Energy Agency, $36 trillion of global investment in clean energy will be required by 2050 to meet the internationally agreed goal of limiting global temperature rise to less than 2 degrees Celsius. This means the world needs to invest an average of $1 trillion per year in clean energy for the next 36 years.

“The continued and dangerous rise in greenhouse gases in the atmosphere is in large part the direct result of past investments in energy and mobility systems based on the use of fossil fuels,” noted Ms. Figueres.

“New investments must now assist in reversing this unsustainable trend, and quickly if the world is to have a chance of staying under a 2 degree Celsius temperature rise.”

The summit is co-organized by CERES – a coalition and network of over 130 pension funds, investors and non-profit organizations, the UN Fund for International Partnerships and the UN Foundation.

It takes place ahead of the UN Secretary-General’s Climate Summit, slated for this September and which is anticipated to build momentum for a strong global climate agreement in 2015. 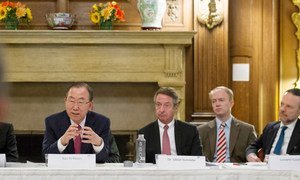