UN Photo/Isaac Billy
Displaced civilians with some of their only possessions take refuge at UN House.

A major concern is the displacement of some 355,000 people driven from their homes since the conflict erupted a month ago between President Salva Kiir’s forces and those of former deputy president Riek Machar, throwing into turmoil the agricultural sector at a time when preparations should be underway for plantings or harvests, “generating an alarming risk of food insecurity and malnutrition,” according to the UN Food and Agriculture Organization (FAO).

“Timing is everything,” FAO country Representative Sue Lautze said today in Juba, the capital. “There are fish in the rivers now, pastoralists are trying to protect their herds and the planting season for maize, groundnut and sorghum starts in March."

The United Nations Mission in South Sudan (UNMISS) said yesterday that as it gains access to besieged areas, the number of people killed “must be much higher” than the 1,000 figure given earlier in the conflict.

Under the UN Crisis Response Plan, FAO and its partners are seeking $61 million for crucial efforts to get seeds, livestock vaccines, fishing gear and other agricultural inputs and services to vulnerable rural and urban families whose production and income activities are being disrupted.

"It is essential that security and stability return to South Sudan immediately so that displaced people can return to their homes, fields, herds and fishing grounds,” Ms. Lautze said.

“Even before the recent fighting, which has displaced more than 352 000 people, some 4.4 million people (out of a total of some 11 million) were already estimated to be facing food insecurity in South Sudan in 2014” FAO Emergency and Rehabilitation Division Director Dominique Burgeon said at the agency’s headquarters in Rome. “Of those, 830 000 were facing acute food insecurity."

FAO’s priorities include restoring the animal health system by rebuilding the cold chain needed to store and transport vaccines, reviving community-based animal health networks, increasing access to seeds and micro-irrigation equipment, support for fishing, and promoting the efficient use of fuels by internally displaced persons (IDPs).

The conflict is affecting major supply routes, displacing traders and leading to rising food and fuel prices, along with the breakdown of local markets which are crucial to rural farmers, fishers and livestock-dependent populations.

"South Sudan was already facing challenges in terms of livestock diseases,” Ms. Lautze said. “In some areas, young animals have been dying at a rate of 40-50 percent. FAO and its partners had recently made progress in partially controlling these diseases and reducing mortality through systematic vaccination, but we estimate that more than half of the country's capacity for vaccine storage and distribution has been lost and must urgently be restored."

For its part, the UN World Food Programme (WFP) has launched a new $57.8-million emergency operation to expand food aid for up to 400,000 IDPs over the next three months, including specialized nutritional support for new mothers and young children who are most at risk from a disruption in their food supply.

“While we and our partners are reaching more people every day, we still face difficulties accessing some areas, and the looting of food and other assets from a number of our compounds and warehouses around the country,” WFP East and Central Africa Regional Director Valerie Guarnieri said on a visit to Juba.

WFP fears the impact on food security will be significant for some time even if political talks now underway in Addis Ababa, Ethiopia, succeed in end hostilities.

With fighting continuing, aid agencies are having trouble reaching many areas of South Sudan. WFP food stocks pre-positioned at nearly 100 sites around the country facilitate the relief effort but these same stocks are also at risk. So far, WFP estimates that 10 per cent of its food in the country has been looted – enough to feed some 180,000 people for a month.

“WFP urges all parties to protect civilians and safeguard humanitarian assets, such as food stocks, so that they can be used to provide critical relief, especially for women and children, affected by the violence,” WFP Deputy country Director Eddie Rowe said. “We join our partners in urgently appealing to both sides to allow access for humanitarian agencies to safely provide assistance to those in need.”

Since about 60 percent of South Sudan is inaccessible by road during the rainy season, WFP would, in a normal year, now be beginning the annual effort to pre-position food in remote locations before the rains start in April or May. Conflict makes that difficult or impossible in some places, and it is likely that some communities in need will be reachable only by air.

Meanwhile, UNMISS continues to protect nearly 60,000 civilians inside 10 bases across the country, and is creating a new site in Juba, where 30,000 IDPs are already seeking shelter at two UN locations. It said today anti-Government forces are in control of Bor in Jonglei state, amid reports of sporadic gunfire close to the UN base there, while Bentiu in the north, where nearly 9,000 civilians are being protected by 570 UN peacekeepers, remains relatively calm.

Aid agencies are extremely concerned about reports of violence against civilians and aid workers, and the looting of humanitarian compounds and commandeering of vehicles. Tomorrow, Assistant Secretary-General for Human Rights Ivan Šimonovic will visit South Sudan to assess the situation amid reports abuses by both sides. 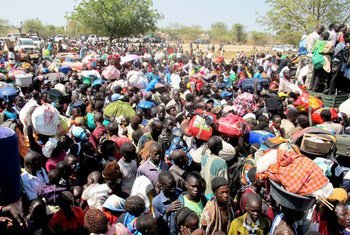 9 January 2014
While the United Nations has released $15 million from its rapid response fund for immediate humanitarian operations in war-torn South Sudan, even amid “very substantial progress”, it could take up to eight weeks before the full 5,500-strong surge in UN peacekeepers and equipment is deployed on the ground.