13 January 2014
The speedy election of a new transition leader is crucial to the stability of the Central African Republic, a senior United Nations official said today, stressing also the importance of starting reconciliation between Christian and Muslim communities in the country after thousands of people have been killed in weeks of sectarian violence.

“The profile of the new head of state of the transition could help restore hope,” UN Special Representative, Babacar Gaye, told journalists via telephone from the capital, Bangui.

In his first direct briefing to the press since President Michel Djotodia and Prime Minister Nicolas Tiangaye stepped down on Friday, Mr. Gaye added that the international community would have to accompany this new team on the road “to free, credible and democratic elections”.

The country’s Parliament and its new interim leader, Alexandre Ferdinand Nguendet, who headed the National Transitional Council (CNT) prior to the flare-up of violence, could begin the process of selection a new transitional president as early as tomorrow, he said.

Under its charter, the CNT has 15 days to organize election of the new head of state of the transition.

“We are confident that these timelines will be respected,” Mr. Gaye said. “We may even deliver in less time.”

The space for elections will be made possible through the expected reinforcement of the African-led International Support Mission to CAR (MISCA) with a contingent from Rwanda and the continued engagement of French troops, known as SANGARIS.

“Hope is within grasp, but not yet in our hand,” said Mr. Gaye, who is also the Head of the UN Integrated Peacebuilding Office in the country (BINUCA).

The conflict in CAR erupted nearly year ago when attacks by mainly Muslim Séléka rebels forced then President François Bozizé to flee. In recent weeks, the fighting has escalated further with ex-Séléka and Christian anti-balaka militias fighting each other.

Relative calm has returned to Bangui, according to media reports. However, 100,000 people continue to gather around the national airport, and one in five people in the country are believed to be displaced, Mr. Gaye said.

One of the main items on the agenda of the next Government, noted Mr. Gaye, will be “to…try to start reconciliation between the communities”.

Speaking last week to the extraordinary summit of the Economic Community of Central African States (ECCAS) in Chad where transitional leadership stepped down, Mr. Gaye, delivering a message to the event on behalf of UN Secretary-General Ban Ki-moon, warned that the past year’s events have profoundly damaged the relationship between Muslim and Christian communities and pose a long-term danger to the country.

In a message, Mr. Ban commended the ECCAS Heads of State for proposing an inclusive national conference to provide all national actors with the opportunity “to share their concerns, agree on common challenges, and collectively find a way out of this crisis”, including through the preparation of elections.

He also expressed concern about “widespread human rights abuses”. The UN is working to establish an International Commission of Inquiry to document the violations, in line with a resolution adopted by the Security Council in early December.

UN officials have been calling for urgent protection and increased assistance to the growing number of persons displaced by the violence.

About half of the population, or some 2.2 million people, are estimated to be in desperate need of humanitarian aid. A donors conference for CAR is set for 1 February in Addis Ababa, Ethiopia, where the African Union has its headquarters. 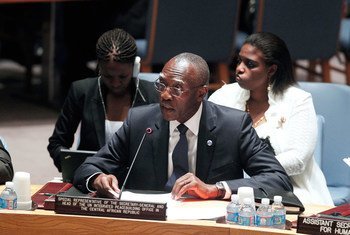 11 January 2014
Following the resignation of the Central African Republic's two interim leaders, the top United Nations official in the crisis-riven country called for calm today, urging the authorities to mobilze around the speedy election of new transitional leadership.