UNHCR/S. Phelps
A displaced woman and her son carry aid from a UN distribution point in Bossangoa.

8 January 2014
A United Nations human rights expert today called for urgent protection and increased assistance to the growing number of persons displaced by violence in the Central African Republic.

“The number of displaced persons has increased dramatically over the past few weeks, and immediate access by humanitarian agencies, including to those sheltering in the airport in Bangui, must be granted without delay,” said UN Special Rapporteur on the human rights of internally displaced persons, Chaloka Beyani.

The UN expert specifically noted the need to strengthen the international community’s response to protect and assist those fleeing the violence, especially women, children, and people with disabilities.

Nearly one million people have been internally displaced in the country, according to the latest figures from the UN refugee agency (UNHCR), nearly half of them from the capital of Bangui.

The UN World Food Programme (WFP) yesterday announced it was resuming food aid for some 100,000 displaced people in the capital for the first time in nearly three weeks since deliveries were suspended after machete-wielding men stormed the distribution site and food was stolen.

Thousands of people are estimated to have been killed, nearly 1 million driven from their homes, and 2.2 million, about half the population, need humanitarian aid in the conflict that erupted when mainly Muslim Séléka rebels launched attacks a year ago and forced President François Bozizé to flee in March.

A transitional government has since been entrusted with restoring peace and paving the way for democratic elections, but armed attacks between ex-Séléka and Christian anti-balaka militias have escalated significantly in the past two weeks.

Mr. Beyani also noted that while crises are flaring up in other parts of the world, they should not affect the scale of the response urgently needed in the CAR.

“Humanitarian agencies urgently need extra resources to provide for the basic needs of those displaced from their homes,” he stressed. 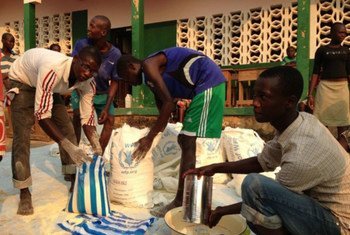 7 January 2014
The United Nations today resumed food aid for some 100,000 displaced people in Bangui, capital of the strife-torn Central African Republic (CAR), for the first time in nearly three weeks since deliveries were suspended when machete-wielding men stormed the distribution site and food was stolen.