8 January 2014
The top two United Nations officials in South Sudan are today meeting with families displaced by the ongoing violence between pro- and anti-Government forces, as aid agencies aim to reach civilians with urgently needed supplies.

There is continued instability, fighting and mobilization of armed forces in a number of locations, including around Bor in Jonglei State and in areas in Unity and Upper Nile States, the UN Mission in South Sudan (UNMISS) confirmed today.

In the city of Malakal in Upper Nile State, Secretary-General Ban Ki-moon's Special Representative, Hilde Johnson, visited the internally displaced persons camp on the UNMISS base. It currently hosts more than 12,000 people, including civilians receiving medical treatment in the UN clinic on the base, a UN spokesperson confirmed.

Meanwhile, the Deputy Special Representative and Humanitarian Coordinator Toby Lanzer, was in Bentiu, Unity State, to assess the humanitarian situation there and the UN response.

There are reports of large movements of civilians in the area, a UN spokesperson told journalists in New York. That movement is raising fears of further fighting in the area, according to media reports.

In the capital, Juba, where the situation continues to be “tense” according to UNMISS, additional United Nations peacekeepers are patrolling the city.

They are also protecting nearly 30,000 civilians at the two UN bases in the city. An additional 32,000 people are seeking refuge at UN compounds in other parts of the country.

Food, healthcare, shelter, water, sanitation and hygiene remain the top priorities for humanitarian response for those displaced. Aid agencies have also begun contingency planning for any potential additional displacement in the coming weeks, and for the rainy season, which is due to start in May.

An estimated 201,000 people have been internally displaced by the current crisis since 15 December, according to the UN Office for the Coordination of Humanitarian Affairs (OCHA).

The situation at the UNMISS base in Bor in Jonglei State, where over 9,000 civilians are being protected, is becoming increasingly strained.

The Mission confirmed today that it was finally able to undertake three flights to deliver food supplies, as well as medically evacuate 54 civilians back to Juba. The UN flights had been unable to reach the area for the past few days.

“Humanitarian access continues to be constrained by active hostilities, attacks on aid workers and assets, interference with humanitarian activities and other obstacles,” the spokesperson said quoting OCHA.

He added that aid agencies continue to engage with all parties to the hostilities to secure safe access to civilians in need.

Mr. Ban and other senior UN officials have repeatedly called for a cessation of violence and a political solution to the conflict, including accountability for grave human rights violations. 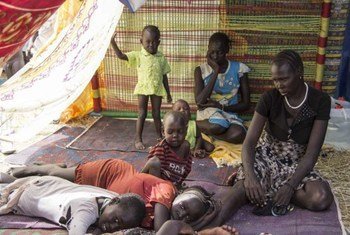 7 January 2014
As the fighting in parts of South Sudan grinds on between Government forces and rebels despite ceasefire talks, more and more civilians are fleeing to neighbouring countries, with some 2,500 people a day now seeking refuge in Uganda, the United Nations refugee agency (UNHCR) reported today.