3 January 2014
The situation in crisis-torn South Sudan remains tense today and, with clashes reported between pro- and anti-Government troops in some areas and thousands of people fleeing the ongoing violence, United Nations officials in the country are urging all parties in the conflict to protect civilians and to allow humanitarian workers safe access to them.

Briefing the press in Geneva today, Jens Laerke, of the UN Office for the Coordination of Humanitarian Affairs (OCHA), referred to a statement by Toby Lanzer, Humanitarian Coordinator in South Sudan, who said that over the previous two weeks, violence drove some 200,000 people from their homes and affected many hundreds of thousands of people indirectly.

In response, aid agencies are scaling up their work, especially in towns which had seen struck by violence and in rural sites where civilians had sought safety. “The largest site of civilians was in Awerial, Lakes State, where up to 76,000 people have gathered,” he said, adding that agencies are providing food, non-food items and basic healthcare there, and are stepping up efforts to make clean water and latrines available.

Fresh fighting in the world's newest country erupted on 15 December when President Kiir said soldiers loyal to Mr. Machar, dismissed from office in July, launched an attempted coup. Mr. Kiir belongs to the Dinka ethnic group and Mr. Machar to the Lou Nuer, and the conflict has been increasingly marked by reports of ethnically targeted violence.

Thousands of people are estimated to have died in the violence, and among those that have been driven from their homes, many are seeking refuge on bases of the UN Mission in South Sudan (UNMISS), which has been authorized by the Security Council to almost double its armed strength to nearly 14,000 in an effort to protect civilians.

Representatives of President Kiir and Mr. Machar are due to meet in the Ethiopian capital of Addis Ababa, according to the Intergovernmental Authority on Development (IGAD), the East African bloc that is mediating the talks.

Mr. Laerke said that the UN Humanitarian Coordinator in South Sudan has called on all parties to facilitate aid agencies' access to civilians, and to protect and respect humanitarian activities, workers, and property at all times.

Humanitarian partners in the strife-riven country have issued a plan which will enable increased assistance to the most severely affected people. It also aims to help those that have left Sudan and sought refuge in South Sudan's Unity and Upper Nile states.

The plan includes provision of protection, water, food, shelter and healthcare, Mr. Laerke said, adding that overall, it targets some 628,000 people over the next three months, and agencies will need $166 million from international donors to implement it.

Meanwhile, according to a UN spokesperson in New York, UNMISS reports the situation in Bor remained tense today, with anti-Government troop movements observed in the city's vicinity. Continued fighting between pro- and anti-Government forces has been reported in Upper Nile State. The security situation remains volatile in Unity State, especially in Mayom County.

UNMISS also reports that the new Bangladeshi police personnel, which arrived from the UN Mission in the Democratic Republic of the Congo (MONUSCO), have been deployed to United Nations bases in Juba, Bor, and Malakal to strengthen security and order inside the bases. The Mission has requested the Government of South Sudan to facilitate its movement of rations, supplies, and equipment, especially to Bor, without delay.

The Mission reported yesterday that it continues to protect around 57,000 civilians across the country. It also reported a drop in the number of civilians at its Malakal base and Bor base. The numbers have been fluctuating in recent days.

In addition, UNMISS said that 246 police officers from two Formed Police Units have deployed to South Sudan to strengthen security and order for civilians seeking refuge inside its bases. A medical team from the UN Mission in Cote d'Ivoire (UNOCI) arrived today in Juba to bolster support at the UN Juba bases. Logistical support for air operations is being provided by the UN Mission in the Democratic Republic of the Congo, MONUSCO.

In a New Year's message to the people of South Sudan, UNMISS chief Hilde Johnson said Wednesday that both the leaders of IGAD and the United Nations were calling for an immediate cessation of hostilities, the release of all political detainees, political dialogue and humanitarian access. She called on the parties to take decisive steps for peace.

Ms. Johnson also emphasized that all violence must stop, and warned against the risk of a cycle of violence between communities in South Sudan. She said that accountability for grave human rights violations will be essential to prevent this cycle of violence, and reported that the Mission's human rights teams continue to gather evidence for use in future accountability measures. 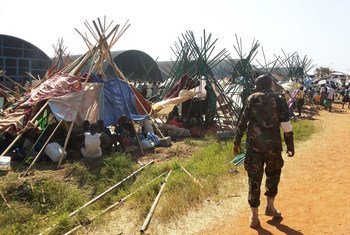 1 January 2014
Amid set peace talks between the Government of South Sudan and warring rebels, the head of the United Nations peacekeeping mission in the country today urged both sides to make crucial efforts to end the violence.