3 January 2014
The humanitarian situation in the Central African Republic remains dire with insecurity hampering the delivery of aid to the more than 935,000 people displaced by the violence, the United Nations refugee agency today said.

Targeted attacks against civilians, looting and the presence of armed elements at some displacement sites had severely limited humanitarian agencies' access to those in need of urgent assistance.

This deteriorating situation, coupled with the long distances between internally displaced persons' (IDPs) sites outside the capital, Bangui, and poor road infrastructure, make it increasingly difficult to reach people displaced by the conflict.

He also cited a “complete breakdown in law and order” as a challenge to putting in place an effective system for aid distribution.

The spokesperson said that despite an international military presence near Bangui airport, they “had not been able to secure conditions for the humanitarian agencies to do their job effectively”.

The Security Council authorized the Mission last month to quell the spiraling violence and human rights abuses. CAR has been thrown into turmoil since mainly Muslim Séléka rebels launched attacks a year ago and forced President François Bozizé to flee in March. A transitional government has since been entrusted with restoring peace and paving the way for democratic elections, but armed clashes have erupted again, notably between ex-Séléka and Christian anti-balaka militias.

UNHCR is scaling up its presence in the country. In addition, since the previous Sunday, the UN agency has organized airlifts from its regional warehouses of vehicles and relief items, such as tents, blankets, and plastic sheets.

Distribution of shelter materials and other relief items is more challenging, Mr. Baloch said, given the increasing numbers of families in need.

“In the previous week, the number of IDPs arriving at the airport had almost doubled, and now there were some 100,000 people there,” he said.

More than half of Bangui's total population - some 512,672 people – are currently sheltering in 67 sites in Bangui or living with host families, according to UNHCR figures. Sixty per cent of those displaced are children.

Continued clashes in Bossangoa, 300 km north of Bangui, had also led to an increase in displaced families, particularly at two nearby sites known as Archbishop and École Liberté.

Also in CAR, the UN World Health Organization (WHO) is today starting a vaccination campaign against measles in parts of the country with support from the UN Children's Fund (UNICEF) and other partners.

Over the next three to five days, some 50,000 doses of the vaccine will be given to children between six months and 15 years of age seeing refuge at the Bangui airport. WHO has confirmed three cases of the viral infection there. 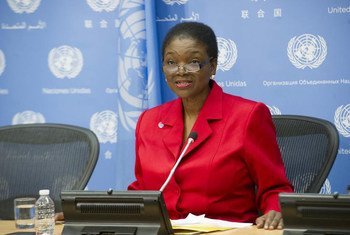 2 January 2014
An unprecedented number of people are beginning 2014 either internally displaced or as refugees, the United Nations humanitarian chief warned today, urging sustained support for millions who have been driven from their homes by violence and bloodshed or uprooted by devastating natural disasters.