While welcoming publication of parts of the interim UK report by Sir Peter Gibson investigating British involvement in so-called extraordinary rendition operations by the United States in which suspects were interrogated in third countries, the experts voiced concern that the proposed official inquiry is to be entrusted to the Parliament’s Intelligence and Security Committee (ISC).

“The UK has, until now, indicated a commitment to the establishment of a judge-led inquiry to take forward the work of Sir Peter Gibson,” the UN Special Rapporteur on the protection and promotion of human rights while countering terrorism, Ben Emmerson, said in a news release.

“I am concerned that this proposal appears to have been abandoned in favour of a purely parliamentary inquiry, which is likely to suffer from many of the same procedural shortcomings,” he warned, referring to an ISC report in 2007 which found no evidence that UK agencies were complicit in any extraordinary rendition. “I urge the British authorities to ensure that the fresh inquiry is given the powers it needs to get at the truth.”

According to media reports, the Gibson inquiry found that British intelligence officers in Afghanistan knew about the mistreatment of suspected militants by the US after the 11 September, 2001 terrorist attacks but were told not to intervene for fear of offending Washington. It found that British spies had also been involved in the practice of extraordinary rendition.

UN Special Rapporteurs on torture Juan E. Méndez also recalled the 2007 ISC report. “It is particularly discouraging to know that the decision was handed over to the ISC which is known to have previously failed to fully investigate prior allegations of torture, ill-treatment, rendition and surveillance in the context of counter-terrorism and national security,” he said in the news release.

He reminded the UK Government of its obligation under the UN Convention against Torture to undertake “a prompt and impartial investigation wherever there are reasonable grounds to believe that torture has been committed, and prosecute suspected perpetrators of torture.”

“The British authorities should take persistent, determined and effective measures to have all allegations of torture or other cruel, inhuman or degrading treatment or punishment investigated promptly, effectively and impartially by an independent, competent domestic authority, as well as whenever there is reasonable ground to believe that such an act has been committed,” he added.

The expert stressed that the UK Government also is obliged to hold responsible, bring to justice and punish all those who encourage, order, tolerate or perpetrate such acts, including the officials in charge of the place of detention where the prohibited act is found to have been committed.

The rapporteurs, independent unpaid experts appointed by and reporting back to the Geneva-based UN Human Rights Council, said they will follow up with the UK Government the terms of reference and powers of the ISC inquiry to determine whether it is capable of meeting international minimum standards. 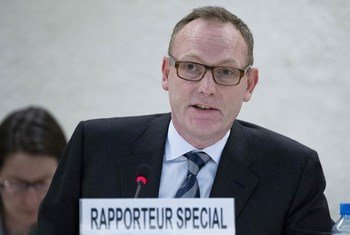 6 March 2013
A United Nations independent expert today urged the Governments of the United States and the United Kingdom to release the findings of confidential inquiries into the detention and interrogation practices of the Central Intelligence Agency (CIA) during the administration of President George W. Bush.