24 December 2013
Secretary-General Ban Ki-moon and his envoy for Yemen have welcomed an agreement, reached yesterday through the country’s ongoing National Dialogue Conference, on the structure of the State and the status of the southern region, which has experienced separatist movements.

“The agreement paves the way for establishing a new unified state, on the basis of federalism and democracy, which upholds human rights, the rule of law, and equal citizenship through the creation of a new State structure and social contract,” Mr. Ban’s spokesperson said today in a statement.

The agreement, according to the spokesperson, provides for the creation of a new federal state, outlines principles that will guide its formation, and stipulates a special arrangement for southern representation in the executive, legislative and judicial branches, as well as in the civil service.

It also calls on President Abdrabuh Mansour Hadi to establish a committee that will determine the number of regions under the federal structure, the spokesperson said.

The UN has been providing support for Yemen's transition, which began as part of the wave of political change in Arab countries in 2011, in four key areas: political facilitation in key areas such as the National Dialogue, technical support, capacity-building and a public information and awareness campaign.

The Secretary-General’s Special Adviser on Yemen, Jamal Benomar, has been facilitating the negotiations on the so-called “southern question” for the past three months, working closely with the President and leaders of political parties.

Mr. Benomar, in his own statement yesterday, praised President Hadi and the other Yemeni parties for their work in reaching the agreement, which was achieved as the outcome document of a dedicated sub-committee of the dialogue conference.

“The Outcome Document reflects the highest degree of consensus among the political constituencies participating in the National Dialogue,” Mr. Benomar said.

In his statement today, Mr. Ban’s spokesperson added that: “The Secretary-General calls on all sides to continue to work together in good faith and in collaboration with his Special Adviser with a view to resolving outstanding issues and advancing the political transition.” 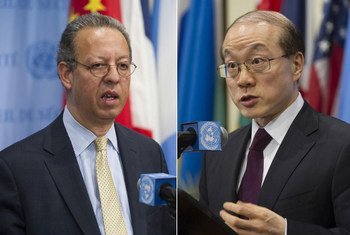 27 November 2013
Welcoming progress thus far in Yemen’s ongoing political transition, the Security Council today pledged to support the Government’s efforts to rebuild the economy and promote national dialogue while warning all those intent on derailing the exercise that it is ready to consider “further measures in response to any actions by individuals or parties that are aimed at disrupting the transition process.”