The Joint Special Representative of the United Nations and the League of Arab States for Syria, Lakhdar Brahimi today announced that more than 30 nations have been invited to attend the long-sought Syria peace conference to be held in Geneva next month.

Mr. Brahimi said invitees to the so-called “Geneva II” conference include the UN, the five permanent members of the Security Council (China, France, Russia, United Kingdom and the United States), the League of Arab States, the European Union, the Organization of Islamic Cooperation, and 26 other countries.

“On Iran, we haven't agreed yet. But it is no secret that we in the United Nations welcome the participation of Iran,” he told journalists in Geneva following meetings there with the United States and Russia, and then with a wider group of countries.

“But our partners in the United States are still not convinced that Iran's participation would be the right thing to do,” he noted, adding that the remaining list of invitees for the 22 January 2014 conference has been agreed to.

The conference, originally scheduled to take place in Geneva, will now be held in two parts, with the opening session in Montreux, and, after a day's break, moving on 24 January to UN headquarters in Geneva. The conference will bring the Syrian Government and the opposition to a negotiating table for the first time since the conflict started in March 2011.

The goal of the conference would be to achieve a political solution to the conflict through a comprehensive agreement between the Government and the opposition for the full implementation of the Geneva communiqué, adopted after the first international meeting on the issue on 30 June 2012.

Turning to the situation on the ground in Syria, Mr. Brahimi told journalists that he wanted to express his “strong disappointment, and maybe anger and regret.”

“The fighting is intensifying all the time, and aid that is available is not reaching the people who need it,” he added. “Prisoners are … many, many prisoners are detained for no apparent reason. And a lot of people have been kidnapped all over Syria, again for no reason.”

He stressed that access is “very, very important” with UN and partners working on getting aid to about 10 million people out of the 23 million who need help.

Today's discussions also focused on women, Mr. Brahimi said, and the importance of making sure that their voice about the future of their country is heard.

A meeting on the topic was held yesterday with a larger conference organized by UN Women scheduled for 12 and 13 January.

“We want it to be a Syrian process, not an international process with Syrian participation,” the joint envoy said. “These Syrian women have got to express themselves about their country and the future, and we will make sure how, we will discuss with the Syrian parties, how the voice of the women will be heard during negotiations.” 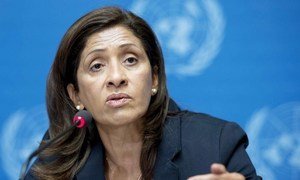 The long-sought international peace conference on Syria is set to begin on 22 January with a one-day meeting in the Swiss town of Montreux, the United Nations confirmed today.