19 December 2013
A group of independent United Nations human rights experts today urged all parties in the Central African Republic (CAR), where armed clashes have escalated in recent weeks leading to deaths and population displacement, to step back from the brink of all-out sectarian conflict.

A group of independent United Nations human rights experts today urged all parties in the Central African Republic (CAR), where armed clashes have escalated in recent weeks leading to deaths and population displacement, to step back from the brink of all-out sectarian conflict.

“The current shocking violence in the Central African Republic threatens to descend into a full-scale sectarian conflict between Christian and Muslim communities, but it can and must be halted now,” the experts said, while expressing grave concern over the escalating violence in the country and the rapidly deteriorating human rights and humanitarian situation.

After the Séléka rebel coalition forced President François Bozizé to flee in March, a transitional government was entrusted with restoring peace and paving the way for democratic elections, but armed clashes have erupted again, sometimes on religious grounds with Christians and Muslims launching reprisal attacks against each other in numerous places in the capital, Bangui. Violence was also reported in the town of Bossangoa, some 400 kilometres north-west of Bangui.

The recent escalation of fighting has forcibly displaced some 210,000 people in the last two weeks in Bangui, according to the UN High Commissioner for Refugees (UNHCR). More than 710, 000 people have been uprooted within CAR since the current crisis began a year ago, while over 75,000 others have fled into exile, the agency added.

The experts noted in a news release that atrocities have been reported by all parties, with UN and media reports suggesting a rapidly rising toll of civilian victims, including women and children.

Retaliatory attacks and arbitrary executions by armed elements from both sides, the recruitment of child soldiers, attacks on medical facilities, and increasing incidents of rape, have all been documented.

“However, an opportunity remains to pull back from the brink of all-out war with the terrible consequences that this entails and to establish an immediate truce to enable dialogue and peace talks to begin,” the experts said. “We urge leaders on all sides to grasp every opportunity to avoid further bloodshed.”

While they welcomed attempts by some religious leaders to establish inter-faith dialogue and to defuse tensions, the experts emphasized the primary responsibility of the State to protect the human rights of all. They also called on the International Conference on the Great Lakes Region to take urgent measures to resolve the crisis.

The experts urged leaders from all sides to “take control of their forces and militias and to cease atrocities immediately,” but warned that, in the current dangerous environment, some initiatives to disarm militia groups were leaving some communities vulnerable to attack by opposing forces.

“We call for international actors to closely monitor the situation in order not to leave communities undefended,” they said.

In addition, full, secure and unfettered access must be provided to humanitarian agencies in view of the hundreds of thousands of people displaced in the country and the rapidly deteriorating humanitarian situation, they added. 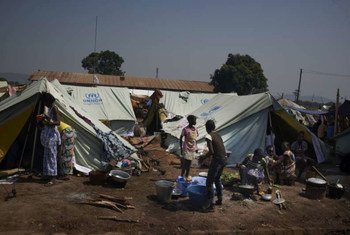 17 December 2013
The United Nations refugee agency said today it has deployed additional emergency teams in the Central African Republic (CAR), where some 210,000 people have been forcibly displaced by violence in the last two weeks in the embattled capital, Bangui.