The Security Council today voiced its grave concern at the worsening security situation and political divisions in Libya which threaten to undermine the country’s democratic transition.

“The Security Council calls on all parties in Libya to support the democratic transition in Libya, including agreement on its immediate next steps, and to engage in political dialogue and refrain from violence and actions that challenge the stability of the State,” the 15-member body said in a presidential statement.

The Libyan Government and people have been undergoing a democratic transition following the toppling of former leader Muammar al-Qadhafi two years ago. Recent months have seen increasing acts of violence and worsening security, including the abduction – and subsequent release – of Prime Minister Ali Zeidan, the killing of unarmed protesters in the capital, Tripoli, and targeted assassinations in Benghazi.

The Council emphasized that all parties “must reject violence against civilians and respect the right of all Libyans to peaceful assembly.” While noting the withdrawal of some armed groups from Tripoli, the Council called for urgent progress towards an inclusive national approach to disarmament, demobilization and reintegration into civilian life or integration into state military and security institutions.

“The Security Council stresses the urgent need to strengthen military and police institutions in Libya,” it added. “In line with the needs and wishes of the Libyan people, the Council supports the efforts of Libyan state forces to restore public security across Libya and counter violence by extremist groups…”

Briefing the Council last week, the Secretary-General’s Special Representative and head of the UN Support Mission in Libya (UNSMIL), Tarek Mitri, said the continued “precariousness” of security in Libya highlights the need for dialogue between the Government and the main armed militias.

“It is essential for all parties to engage in dialogue and create the right balance of incentives in order to stimulate a comprehensive process of reintegration and eventual disarmament,” he stated.

The Council today also welcomed the efforts of Mr. Mitri and UNSMIL to facilitate a meaningful Libya-led national dialogue and strongly encouraged further steps in this regard.

“The Council underlines the importance of a single, inclusive national dialogue that can forge consensus on the priorities for securing a transition to democracy and help ensure that all views in Libya are properly taken into account.” 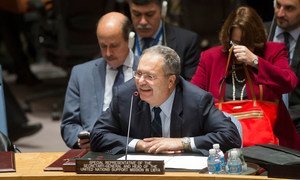 The continued “precariousness” of security in Libya highlights the need for dialogue between the Government and the main armed militias, the top United Nations official in the North African country told the Security Council today.