16 December 2013
With 2013 marked by a deterioration “beyond all imagination” in the Syrian conflict and the “imminent danger of mass atrocities” looming in the Central African Republic (CAR), Secretary-General Ban Ki-moon today called on world leaders to follow the example of the late South African President Nelson Mandela in making 2014 the year of protecting people.

“I can think of nothing I would rather see in 2014 than for world leaders to emulate his example in upholding their moral and political responsibilities,” Mr. Ban said in his end-of-year news conference at United Nations Headquarters in New York, noting that 2013 will be remembered as the year in which the world bid a sad but celebratory farewell to the man who became South Africa’s first post-apartheid and democratically elected president with a message of reconciliation for all.

The Secretary-General devoted the first part of his opening statement to Syria, where over 100,000 people have been killed and 8 million driven from their homes, 2 million of them seeking refuge in neighbouring countries, since the conflict first erupted in March 2011 between forces loyal to President Bashar al-Assad and initially peaceful opponents seeking to oust him.

“The people of Syria cannot afford another year, another month, even another day of brutality and destruction,” he said, telling reporters that he had just come from briefing the Security Council on final report of the mission led by Professor Åke Sellström probing allegations of the use of chemical weapons in Syria.

“We should all be deeply concerned by its findings that chemical weapons were used not only in the August attack in Ghouta area of Damascus, but on several other occasions, including against civilians, the UN chief said, adding: “2013 was the year in which the Syrian conflict deteriorated beyond all imagination.”

Noting that he will soon issue invitations to the international conference on Syria to be held in Geneva on 22 January, he called on the Syrian parties to end the violence and provide humanitarian access and for States and organizations with influence on the Syrian sides to help them prepare for constructive engagement.

He stressed that the humanitarian situation continues to worsen. The UN has started distributing winter aid to help people cope with the harsh conditions that are taking hold, but faces “severe and chronic underfunding” for the relief effort, noting that the 2014 appeal for Syria launched today in Geneva is the biggest in UN history at $6.5 billion.

“I call for generous support, including at the pledging conference I will convene on 15 January in Kuwait,” he said, adding that 9.5 million Syrians, almost half the total population, have been affected by the crisis with most of the infrastructure, schools, sanitation facilities and hospitals destroyed.

Turning to CAR’s descent “into chaos” in 2013, Mr. Ban said: “I am gravely concerned about the imminent danger of mass atrocities. I call on the country’s transitional authorities to protect people. I appeal to religious and community leaders to prevent polarization.”

CAR has been thrown into turmoil since Séléka rebels launched attacks a year ago and forced President François Bozizé to flee in March. A transitional government has since been entrusted with restoring peace and paving the way for democratic elections, but armed clashes have erupted again and the transitional government is not functioning, Mr. Ban stressed.

Thousands of people have been killed and over 600,000 driven from their homes in a conflict that has become increasingly marked by inter-communal clashes between Christians and Muslims.

The UN will establish a commission of inquiry to investigate reports of atrocities. “Perpetrators must be held to account,” Mr. Ban said.

On the positive side of the balance sheet for 2013, the Secretary-General cited the “landmark” UN agreement on the destruction of Syria’s chemical weapons programme, the General Assembly’s adoption of the Arms Trade Treaty, Member States’ agreement on a roadmap for shaping the post-2015 development agenda, and the interim agreement between Iran and the Security Council’s five Permanent Members and Germany on Iran’s nuclear programme.

He also noted that peacekeeping and mediation promoted stability across the Sahel and West Africa, and that heightened UN-World Bank cooperation in the region has mobilized political and financial support, including more than $8 billion in new pledges from the World Bank and European Union.

The military gains by the Democratic Republic of the Congo (DRC), supported by the UN peacekeeping mission there (MONUSCO), including its intervention brigade, and the parallel political agreement signed last week between the Congolese Government and M23 rebels also figure among the successes of 2013.

“I want this diplomatic momentum to carry over into the New Year,” Mr. Ban declared. “We must make 2014 the year of protecting people - their security, their fundamental rights, their basic well-being.”

He noted that the coming year will be a key period for difficult transitions in Afghanistan and the Arab world, urged Israeli and Palestinian negotiators to show “the leadership and foresight that will at long last produce a comprehensive peace agreement,” and appealed to Government s and the opposition in Ukraine and Thailand to act with restraint and refrain from violence.

Following the latest “dramatic developments” in the Democratic People’s Republic of Korea (DPRK), in which leader Kim Jong-un’s uncle was executed for treason, Mr. Ban called on the country’s leadership to work towards the verifiable denuclearization of the Korean Peninsula and to abide by global human rights norms.

“The year ahead will be crucial for development. Achieving the Millennium Development Goals by the end of 2015 means accelerating efforts now, especially on lagging goals like sanitation and maternal health,” he said referring to the eight targets set by the UN Millennium Summit of 2000 to slash poverty and hunger, reduce maternal and infant mortality and diseases and ensure universal access to health care and education.

“Agreeing on a new agenda and on a set of sustainable development goals requires intensified discussions. And reaching a climate agreement in 2015 means doing heavy lifting in 2014,” he added of the efforts to achieve a global accord to curb global warming gas emission and mitigate the effects of climate change.

Asked what lessons he has learnt in the seven years he has been Secretary-General, Mr. Ban stressed that the UN cannot carry out all the tasks and meet all the challenges facing it alone. “We need support from many regional and sub-regional organizations,” he said.

“Second, to mobilize our resources which are used as tools – if we do not have effective tools, how can we do it? That is why I have proposed to the General Assembly: let us have some more structured and effective way of mobilizing this support from all of the Member States and business communities and civil society. That is what I proposed in the form of a partnership facility. That is one very important lesson.”

One month on, UN renews pledge to help Philippines recover from deadly typhoon 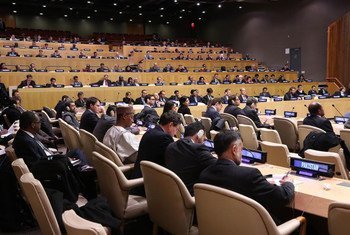 13 December 2013
Secretary-General Ban Ki-moon today called on the international community to hold accountable those responsible for the use of chemical weapons in Syria, following the findings of a United Nations team that such weapons were used on several occasions at multiple sites against both civilians and military targets.