9 December 2013
A group of independent United Nations human rights experts today called on the Iraqi Government to clarify the whereabouts of seven residents of Camp Ashraf, who were allegedly abducted last September after an attack that left 52 people dead, guarantee their safety and prevent their extradition to Iran.

More than 3,000 Iranian exiles – many of them members of a group known as the People’s Mojahedeen of Iran – have been based at the Ashraf refugee camp near Baghdad since the 1980s.

All of them have been relocated to Camp Hurriya, while the Office of the UN High Commissioner for Refugees (UNHCR) carries out a process to determine their refugee status, and resettle them outside of the country, in line with an agreement signed in December 2011 between the UN and the Iraqi Government.

The experts, in a news release, voiced their serious concern about the lack of information from the Iraqi authorities regarding the results of ongoing investigations into the September attack.

“We call upon the Government of Iraq to speed up the investigations in order to disclose the fate and whereabouts of the individuals,” the Working Group on Enforced or Involuntary Disappearances said, while recalling that, at some point, Iraqi forces allegedly admitted having these individuals in custody.

While the facts are still being established three months after the attack, there are allegations that the incident and the abduction of the seven residents of Camp Ashraf, including six women, were conducted by Iraqi security forces, the news release noted.

“International law clearly requires Governments to ensure that all allegations of killings are investigated in a prompt, effective and impartial manner, irrespective of who the perpetrator is,” the Special Rapporteur on extrajudicial, summary or arbitrary executions, Christof Heyns, noted. “Failure to do so is a violation of the International Covenant on Civil and Political Rights.”

The UN Working Group on Arbitrary Detention has consistently held that the detention in Camp Ashraf is arbitrary, said Mads Andenas, who currently heads the expert body.

“The Iraqi Government has a particular responsibility to protect the detainees against human rights violations such as the recent deaths and abductions, and must now instigate independent investigations, end the detention regime, and in the meantime provide effective protection to those who remain in detention.”

The Special Rapporteur on torture and other cruel, inhuman or degrading treatment or punishment, Juan E. Méndez, echoed the urgent call to establish the fate and whereabouts of the seven Iranian exiles. “Detention in secret places can facilitate the perpetration of torture and other ill-treatment and can in itself constitute a form of such treatment,” he warned.

Concerns have been raised that the seven may be forcibly returned to Iran, where they might be at risk of being persecuted, tortured or subjected to other forms of ill-treatment. According to UNHCR, the seven missing residents are asylum-seekers enjoying the status of protected persons.

“Iraq’s obligations under international law are clear, the Government shall not expel, return, extradite or in any other way transfer a person to another State where there are substantial grounds for believing that the person would be in danger of being subjected to torture,” Mr. Mendez underscored.

Alfred de Zayas, the Independent Expert on the promotion of a democratic and equitable international order, noted that this is the third time that the residents of Camp Ashraf have been subjected to physical assault.

“The families of the killed and disappeared are entitled to the right to know what happened to their loved ones, and to adequate reparation for the suffering endured,” he stated. 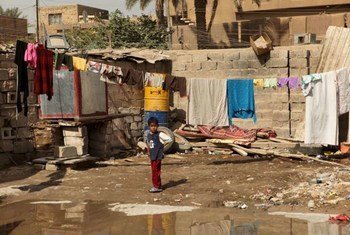 24 September 2013
The United Nations human rights office today called on the Government of Iraq to do all it can to ascertain the whereabouts of seven former residents of Camp Ashraf, who have been missing since the facility, which housed Iranian exiles, was attacked on 1 September, leaving at least 52 residents dead.