6 December 2013
The United Nations family today mourned the loss – and celebrated the enduring legacy – of Nelson Mandela, the former South African leader and peace advocate who passed away yesterday at the age of 95.

The United Nations family today mourned the loss – and celebrated the enduring legacy – of Nelson Mandela, the former South African leader and peace advocate who passed away yesterday at the age of 95.

As the UN flag was lowered to half-staff over the world body's Headquarters in New York, the 193-member General Assembly held a moment of silence to honour the memory of the man affectionately known as “Madiba,” who emerged from 27 years of imprisonment to become South Africa's first black President and is known worldwide for his compassionate yet determined efforts to dismantle the country's legacy of apartheid.

“Today, in this Assembly of Nations, we mourn the loss of Mr. Nelson Mandela, one of our world's greatest leaders,” said Assembly President John Ashe, who added that the example of Mr. Mandela's life and actions, “demonstrates the difference one person can make in the face of adversity, oppression and prejudice, while maintaining a disposition of humility, humour and modesty that is so rare amongst people of his stature.”

In his remarks, UN Deputy Secretary-General Jan Eliasson hailed Mr. Mandela's courage, farsightedness, political skills, and kindness, adding that: “In a world too often riven and divided by vicious cycles of violence and revenge, perhaps the most impressive of President Mandela's gifts was his power of forgiveness, his ability to overcome bitterness and hatred.”

“We remember Nelson Mandela today. But we should carry his spirit with us every day,” continued Mr. Eliasson. “It means, speaking out against prejudice and discrimination wherever we see their dark manifestations. It means, standing up against the indignity and deprivation that millions of our fellow human beings still suffer around the world.” 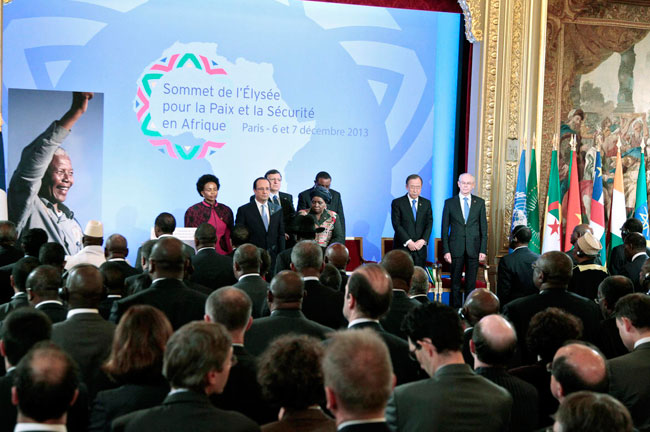 Secretary-General Ban Ki-moon (2nd right) and leaders attending the Élysée Summit for Peace and Security in Africa observe a minute of silence in honour of Nelson Mandela. UN Photo/Paulo Filgueiras 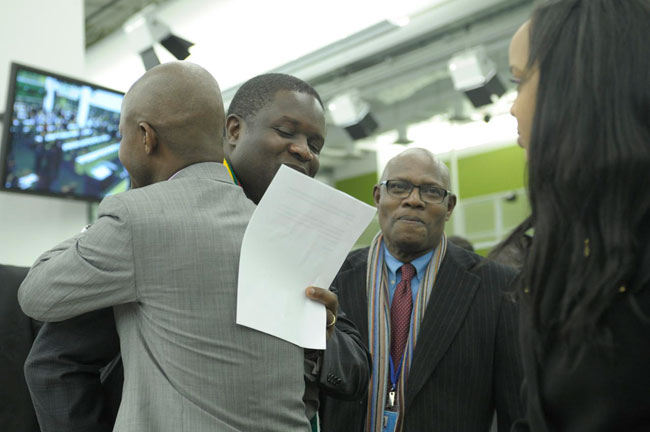 Condolences expressed to a member of the South Africa delegation on the passing of Nelson Mandela. UN Photo/Amanda Voisard 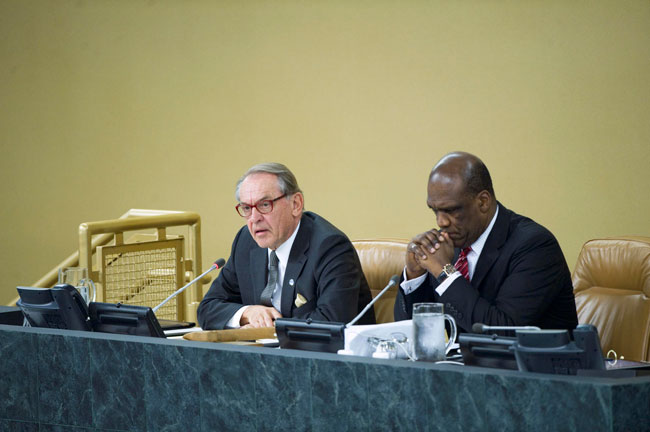 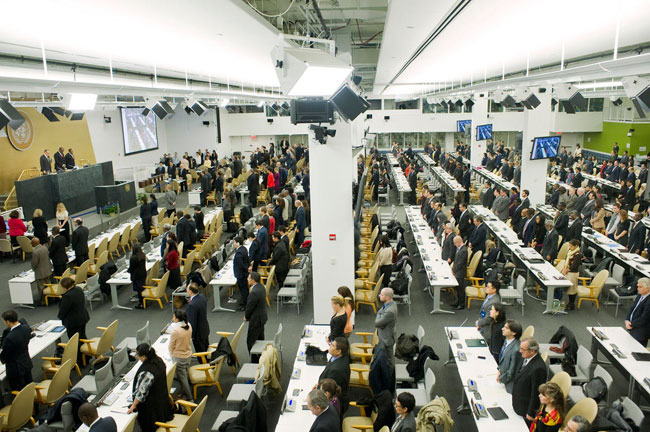 The General Assembly observes a minute of silence in honour of the late Nelson Mandela. UN Photo/Amanda Voisard 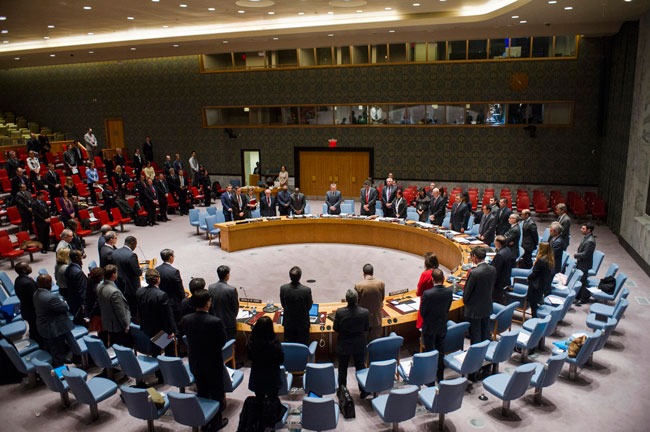 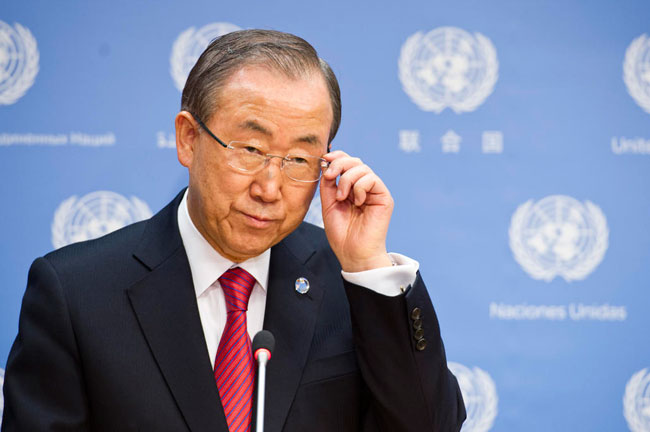 Mr. Mandela's ground-breaking legacy and inspirational spirit was also hailed by Secretary-General Ban Ki-moon who spoke to the press soon after the South African leader's passing was announced. Calling him a “giant for justice,” the UN chief said Mr. Mandela “showed what is possible for our world and within each one of us – if we believe, dream and work together for justice and humanity.”

Recalling his memories of meeting Mr. Mandela, the Secretary-General said he had been deeply touched and inspired. “When I praised him for his lifelong contribution to end apartheid he said 'It is not only me, but hundreds and hundreds of known and unknown people that contributed.' That has stuck with me ever since.”

Among the many tributes pouring in from across the UN system to honour Mr.

Mandela, the Security Council, which stopped a public meeting yesterday afternoon to hold a moment of silence, issued a statement last night expressing deep admiration for the “moral and political leadership” he displayed and his decisive role in shaping the peaceful transition to a united and democratic South Africa. See a compilation of photos of Mr. Mandela's activities at the UN.

In her remarks, UN High Commissioner for Human Rights Navi Pillay said she remembers well how, when Mr. Mandela was finally released from prison, feelings in South Africa were boiling: feelings of hatred, “a thirst for revenge, a burning desire to discriminate against those who had so ruthlessly discriminated against us. I shared some of those feelings – it was hard not to, after living so many long years under apartheid.”

But, she said, Mr. Mandela refused to go down that path, just as earlier he had refused to make a deal to win his own freedom in return for selling out on the principles of the liberation movement. “He turned it all around with words. He told us to throw our spears and guns into the sea. He told us to set aside our desire for vengeance and work for a South Africa not just free of racism, but free of all types of discrimination.”

As a young lawyer, Ms. Pillay acted as a defence attorney for anti-apartheid activists, exposing torture, and helping establish key rights for prisoners on Robben Island. In 1995, after the end of apartheid, Mr. Mandela appointed her to be the first black woman judge on the South African High Court. Later, he launched her international career when he asked her to serve as a judge on the International Criminal Tribunal for Rwanda (ICTR), where she served a total of eight years, including four as President.

Michel Sidibé, Executive Director of the Joint UN Programme on HIV/AIDS (UNAIDS) said the agency and the entire AIDS community are heartbroken by the passing of the global statesman, whom he hailed as a “passionate advocate for people living with HIV.” He said that Mr. Mandela's actions helped save millions of lives and transformed health in Africa.

“He broke the conspiracy of silence and gave hope that all people should live with dignity,” said Mr. Sidibé, explaining that Mr. Mandela devoted much of his time advocating for access to HIV treatment, ending stigma and ensuring all babies are born free of the virus. “He was my personal hero and showed me that even in the face of adversity it is possible to realize your dreams and move mountains, the agency chief added.

Hailing Mr. Mandela as “a giant among men,” Irina Bokova, Director-General of the UN Educational, Scientific and Cultural Organization (UNESCO) said the South African leader had taught the world an enduring lesson about the power of peace and reconciliation, the importance of forgiveness and respect for the dignity of all people. “the Greatest tribute we can pay him is to carry on his message of hope and to continue the fierce defence of the value she stood for,” she said. 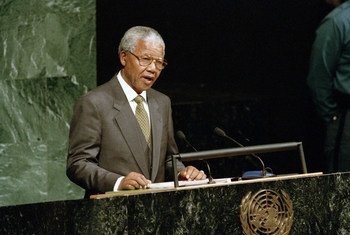 5 December 2013
Secretary-General Ban Ki-moon has expressed his profound sadness at the passing of Nelson Mandela, extolling the life of the late human rights lawyer, prisoner of conscience, international peacemaker and first democratically-elected President of post-apartheid South Africa as an inspiration for all.