4 December 2013
The United Nations Security Council has strongly condemned the recent attacks in Afghanistan’s Uruzgan and Faryab provinces resulting in the deaths of nine development workers, bringing to 237 the number of attacks against humanitarian personnel, facilities and assets in Afghanistan so far this year.

In a statement to the press today, Security Council members condemned in the strongest terms the attacks in Uruzgan province on 26 November and Faryab province on 27 November. They expressed their deep sympathy and sincere condolences to the families of the victims of the “heinous acts”, and to the Government and people of Afghanistan.

Condemning acts of violence against development workers and humanitarian personnel, the Council stressed that such personnel are undertaking essential work in support of the Afghan people and that the continuation of such acts “significantly impedes the delivery of this important assistance to Afghanistan.”

The members of the Council reiterated their serious concern at the threats posed by the Taliban, Al-Qaida and illegal armed groups to the local population, national security forces, international military and international assistance efforts in Afghanistan, particularly in light of a number of recent terrorist attacks in Kabul and elsewhere in the country.

Underlining the need to bring perpetrators, organizers, financiers and sponsors of these reprehensible acts of terrorism to justice, the Council urged all States, in accordance with their obligations under international law and relevant Security Council resolutions, to cooperate actively with the Afghan authorities in this regard.

Council members reaffirmed that terrorism in all its forms and manifestations is criminal and unjustifiable, regardless of its motivation, wherever, whenever and by whomsoever committed, and should not be associated with any religion, nationality, civilization or ethnic group.

They also reaffirmed the need to combat by all means, in accordance with the UN Charter and all obligations under international law, in particular international human rights, refugee and humanitarian law, threats to international peace and security caused by terrorist acts.

The Council reiterated that no terrorist act can reverse the path towards Afghan-led peace, democracy and stability in Afghanistan, which is supported by the people and the Afghan Government and the international community.

On Monday, Mark Bowden, UN Humanitarian Coordinator for the country, called on all actors in Afghanistan to respect and uphold the neutrality and independence of relief workers, saying that the tragic incidents of 26 and 27 November illustrate the growing risks surrounding the delivery of aid and the increasing disrespect for humanitarian personnel in Afghanistan. 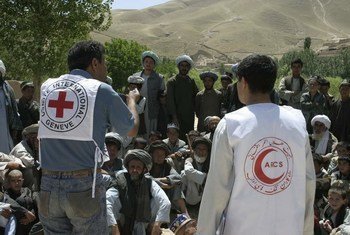 2 December 2013
Expressing deep regret at the recent deaths of nine Afghan aid workers in two separate attacks, the United Nations Humanitarian Coordinator for the country has called on all actors in Afghanistan to respect and uphold the neutrality and independence of relief workers.