A team from the United Nations nuclear watchdog today praised Japan for its efforts to decommission the damaged Fukushima power station, while noting that several complex challenges have to be addressed to ensure the plant’s stability.

“Japan has established a good foundation to improve its strategy and to allocate the necessary resources to conduct the safe decommissioning of Fukushima Daiichi,” said team leader Juan Carlos Lentijo, Director of Nuclear Fuel Cycle and Waste Technology at the International Atomic Energy Agency (IAEA).

“The situation, however, remains very complex, and there will continue to be very challenging issues that must be resolved to ensure the plant’s long-term stability,” he added in a news release.

In March 2011, a 9.0-magnitude earthquake created a tsunami that in addition to killing 20,000 people, slammed into the Fukushima Daiichi nuclear power station, disabling cooling systems and leading to fuel meltdowns in three of the six units. The incident was reported to be the worst nuclear accident since the 1986 Chernobyl disaster.

The 19-member team from the IAEA that visited the site from 25 November to 4 December praised Japan for adopting “a more proactive approach” towards addressing the many complex challenges posed by the nuclear accident, adding that relevant authorities have evolved their strategies over time to develop sustainable solutions.

At the request of the Japanese Government, the team examined a wide variety of issues related to decommissioning the power plant, including contaminated water management issues. It also considered Japan’s efforts to monitor radiation conditions in the marine environment, including seawater, sediments, and animal and plant life.

In its preliminary report, delivered to Japanese authorities today, the team acknowledged a number of achievements in preparing Fukushima for decommissioning, such as a comprehensive set of measures to manage “extensive” contaminated water issues and a monitoring programme set up to track radiation levels in the environment around the accident site, including the marine environment.

At the same time, the IAEA team provided advice in areas where current practices could be improved. For example, the Government and TEPCO are encouraged to continue their efforts to address water issues at the site, including preventing groundwater from entering the reactor buildings and monitoring the effectiveness of all such measures.

“Regarding the growing amounts of contaminated water at the site, TEPCO should bolster its efforts to treat this water and then examine all options for its further management, including the possibility of resuming controlled discharges in compliance with authorized limits,” said the team.

To pursue this option, the team continued, TEPCO should prepare appropriate safety and environmental impact assessments and submit them for regulatory review.

In addition, the team suggested that Japan continue its transition to long-term stability of the site and to develop waste management solutions. Waste facilities should be planned to support the decommissioning process for its lifetime, and a laboratory should be established for waste characterization, it said.

The visit that concluded today came in the context of the IAEA’s 2011 Action Plan on Nuclear Safety, which defines a programme of work to strengthen the global nuclear safety framework, and encourages the use of peer review missions to take full advantage of global experience.

While in Japan, the team held extensive discussions with officials from the Ministry of Economy, Trade and Industry as well as from TEPCO and the Nuclear Regulation Authority. It also visited the nuclear accident site to gain first-hand information about conditions at the power plant and progress toward decommissioning the facility.

“We are still at the beginning of a lengthy process,” Mr. Lentijo said, “but Japan is gaining a better understanding of the situation, an understanding that is critical to address the challenges.”

The IAEA team plans to deliver its final report to Japan by the end of January. 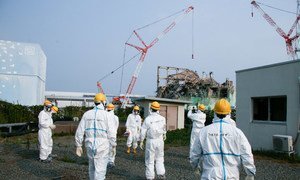 Good progress has been made by Japan in remediation efforts in areas affected by the Fukushima Daiichi nuclear accident, a group of United Nations experts have said in a preliminary report, while encouraging the Government to better communicate its decontamination goals to the public.