More than 15,000 people urgently need relief aid in south-east Niger after the Komadougou River – which most of the year was practically dried out – burst its banks and flooded their communities, the United Nations humanitarian wing said today.

“The seasonal flooding began a month ago and caught locals and authorities largely unprepared, as water in the river rose to an unprecedented level in mid-November,” said Jens Laerke, spokesperson for the UN Office for the Coordination of Humanitarian Affairs (OCHA).

Briefing the press in Geneva, he said that humanitarian workers on the ground in Niger have reported that people need food, water purification, sanitation supplies, and access to health care.

Mr. Laerke said the Government of Niger is leading the emergency relief operation, with the support of UN agencies and other humanitarian partners, and had already distributed 94 tons of food. Authorities had also identified sites to which affected populations could relocate.

“Meanwhile, the flooding continues and at least 20 more villages are at risk,” he warned, explaining that farmland is also under water, triggering concern for people’s long-term food security situation.

In addition, floods have affected transport systems and paralyzed local trade, which is an important source of income for people living along the border with Nigeria. He noted that while authorities report an increase of food imports from Nigeria, prices rose dramatically; for example, the price of a 100 kilogramme bag of flour had gone up by 30 per cent. 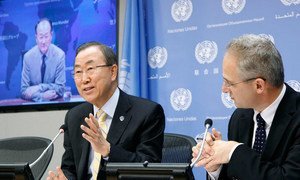 Secretary-General Ban Ki-moon and World Bank President Jim Yong Kim announced today they are teaming up for a trip to the Sahel next week to address pressing issues in the vast African region such as pervasive poverty, food insecurity and conflict.