Serious resource constraints are forcing the United Nations World Food Programme (WFP) to reduce or interrupt some of its activities in the Democratic Republic of Congo (DRC) beginning this month, leaving thousands of people with no food assistance.

WFP, which is funded entirely by voluntary contributions, urgently needs $75 million to continue its operations in DRC over the next six months, it stated in a news release. One out ten children in DR Congo suffers from acute malnutrition and 6.3 million people there are facing hunger and need food assistance.

Funding shortages over the last six months have meant that WFP has already had to halve the rations distributed to displaced people in North Kivu province, at a time when the overall food security situation is deteriorating in that part of eastern DRC.

In North and South Kivu and in Orientale provinces, some 500,000 food-insecure displaced people will be affected by the funding crisis, according to the agency. The provision of daily hot meals to thousands of schoolchildren is also in jeopardy, as is life-saving nutritional support to some 180,000 malnourished children, pregnant women and nursing mothers across the country.

“We are very worried about the fate of thousands of people who depend on WFP food assistance,” said Martin Ohlsen, WFP Representative in DRC. “At a time when the Congolese Government and the international community are intensifying their efforts to stabilize the eastern DRC, a suspension, even a reduction, of humanitarian assistance could seriously compromise our long-standing investment in improving food security, restoring livelihoods and building resilience.

“It’s hard not to think that the tremendous needs in the Philippines and Syria are overshadowing cries for help from less visible, under-reported parts of the world,” Mr. Ohlsen added, stressing the need for predictable funding over coming months.

WFP also noted that, amid a growing awareness about the threat of sexual violence in areas of conflict, it is working closely with its partners to ensure that measures are taken to protect women in the DRC, where rape and other violent attacks against women are rife.

Food distribution sites are chosen in close consultation with women to limit their exposure to attack and, where possible, use is made of electronic vouchers for food and ‘mobile money’ to minimize friction between beneficiaries and the communities in which they live, said the agency. 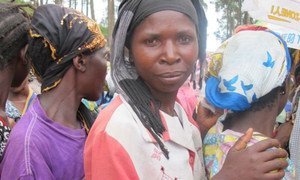 The United Nations food relief agency today said it will fly in 20 metric tons of emergency food supplies to recently displaced persons in the town of Punia in the Democratic Republic of the Congo (DRC), one of the hardest areas to reach in the eastern part of the country.